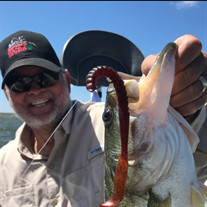 Acton Brumley passed away unexpectedly on June 16, 2019 at the age of 63. Acton was born on February 29, 1956 to Lyster Acton Brumley, Sr. and Mary Wardlaw Brumley. Acton is survived by his wife, Terry Steele Brumley, sons Jeremy Brumley and Tyler Brumley and his precious new granddaughter, Camila Brumley, along with dozens of aunts, uncles, cousins and a countless amount of very special friends. Acton was a fifth-generation rancher in Val Verde County. He grew up in Del Rio helping his parents in the ranching business and Buick Car Dealership. Acton attended Del Rio schools and was active in the 4-H Club. After attending Angelo State University, he stayed busy ranching and later opened his business, Brumley Baits and Brumley Trolling Motor Repair in San Angelo. Acton met his love, Terry Steele, in San Angelo. They were married in Del Rio on October 11, 1986. They raised their sons, Jeremy and Tyler in San Angelo and after years in the making, moved to San Antonio. Acton was famous for his skills with the bass guitar. He made great friendships playing in many bands over the years, but he was probably best remembered for playing in his last band, the Texas Time Machine. Most recently, at the Whitehead Family Christmas Dinner, he entertained all present, playing with the band and showing his big smile. Terry so enjoyed listening to him play. Music was a passion they shared, and they loved to listen to bands with friends at The Grill in Leon Springs. In addition to his passion for guitar playing and good music, Acton was also an avid fisherman and was known for making the best fishing lures ever...ensuring a good catch! He was a member of the San Angelo Bass Club and Quality Bass Club in San Antonio. He enjoyed fishing every chance he had and made countless visits to Lake Amistad, his favorite lake to fish. Acton was such a good man and he will be deeply missed! He was so loving and caring and devoted to his wife, Terry, and sons, Jeremy and Tyler. He cared deeply for all his friends and relatives, of which there are many. Terry is forever grateful and blessed to have had Acton as her husband and best friend for 32 plus years. Acton showed her what love is, she felt it. The family would like to thank you all for the outpouring of love and support! Memorials may be made to West Texas Boys Ranch, Children's Miracle Network, Texas Parks and Wildlife or something of your choosing. The funeral service will be held at First United Methodist Church in Del Rio, Texas on Saturday, June 29th at 3:00 P.M. Burial at Masonic will follow, where Acton will be laid to rest, next to his Mother And Father. Pallbearers:Jeremy Brumley, Martin "Primo" Wardlaw, George Wardlaw, Kerr Wardlaw, Robert Steele, Camden Steele and Paul Roman Honorary Pallbearers:Jimmy Carter, Harrison Carter, Preston Carter, Rusty Chalk, David Kokernot, Waynemar Brown, David Wharton, Tuffy Whitehead, David Robertson, Mike Marsalis, Bud Nelson, Jerry Blackwood, Jesse Hasty, Galen Weiershausen, Wesley Mikeska, James Michulka, John Wurster, Mitch Kirby, Howard Ward, Bud Martin, Vernon Pruitt, Brooks Hartsfield, Blake Hartsfield, Carter Steele and Tommy Wallen. Funeral arrangements are under the care and direction of G.W. Cox Memorial Funeral Home, 114 Fletcher Drive, Del Rio, Texas. For more information you may contact us at (830) 775-2000 or www.gwcoxmemorialfuneralhome.com.

Acton Brumley passed away unexpectedly on June 16, 2019 at the age of 63. Acton was born on February 29, 1956 to Lyster Acton Brumley, Sr. and Mary Wardlaw Brumley. Acton is survived by his wife, Terry Steele Brumley, sons Jeremy Brumley and... View Obituary & Service Information

The family of Acton Brumley created this Life Tributes page to make it easy to share your memories.

Send flowers to the Brumley family.