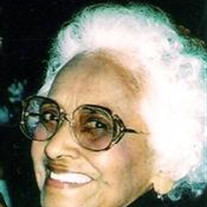 Agapita S. Morin entered into Eternal Rest on August 4, 2013 at the local hospital in Del Rio, Texas. She was born March 24, 1922 in Brackettville, Texas. She is survived by her daughters: Lydia Tipps and Husband Jeff; and Maria Dolores Buentello... View Obituary & Service Information

The family of Agapita S Morin created this Life Tributes page to make it easy to share your memories.

Send flowers to the Morin family.