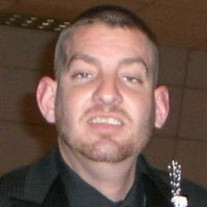 Alan Coulter Bonnet, 34, of Del Rio, passed away on October 30, 2015, in San Antonio. Alan was born on January 29, 1981, to Gary Alan Bonnet and Sandra Holly Adams. Alan is survived by: Mother: Sandra Holly Adams of Del Rio TX; Father: Gary Alan Bonnet, Del Rio TX; brothers: Brandon Bonnet of Del Rio and Caleb Bonnet of Gainesville TX; Grandmother: Gail W. Bonnet of Del Rio TX; Grandmother: Thelma M. Adams of Gainesville TX; Uncles: Craig, Ted, and Byran Bonnet; Aunt: Linda Dorain Hamilton; Uncles: Steven L. Adams and Stanley D. Adams. Alan was blessed to have an extremely close relationship with his brother, Brandon, who stood tirelessly by Alan’s side as he received medical care in San Antonio. Alan was well-known to, and friends with, many Del Rio residents. Regardless of his personal circumstances, Alan approached life with a positive attitude and outlook that was infectious to those around him. Alan was extremely loyal and dedicated to his many friends. You could count on Alan to truly listen to your problems, appreciate your feelings, and offer reasoned guidance. Of course, his guidance often involved his witty sense of humor that was certain to generate laughter. Alan’s legacy is unquestionably defined by the positive impact that he had in the lives of so many people. Alan was a staple in our community. His absence leaves an incredible void, but his memory is certain to persist in our hearts indefinitely. Visitation will be on Friday, 6-9:00P.M, November 6, 2015 at G. W. Cox Memorial Funeral Home. Funeral service will be on Saturday, 3:00P.M, November 7, 2015 at the First United Methodist Church with Pastor Steve Adams officiating. Interment will follow to the Masonic Cemetery. Funeral arrangements with G. W. Cox Memorial Funeral Home, of Del Rio LTD, 114 Fletcher Drive, Del Rio, Texas. 78840 Ph: 830.775.2000

The family of Alan Coulter Bonnet created this Life Tributes page to make it easy to share your memories.

Send flowers to the Bonnet family.