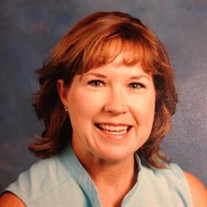 April Donnette Blake, 48, passed away April 8, 2014 at her home in Brackettville, Texas. She was born April 14, 1965 in Dilley, Texas. She is survived by her spouse: Brian Blake; sons: Chris Blake of Lubbock, Texas and Wyatt Blake of Brackettville,... View Obituary & Service Information

The family of April Donnette Blake created this Life Tributes page to make it easy to share your memories.

Send flowers to the Blake family.