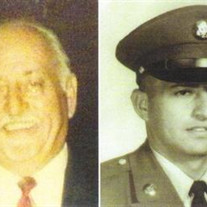 Armando Maldonado Adams went to be with the Lord on August 12, 2016 at the age of 74 in Del Rio, Texas. He was born in Encinal, Texas on February 27, 1942. He is survived by his children: Jesus Adams Sr. and wife Ercilia, Anna Adams Pina and... View Obituary & Service Information

The family of Armando M. Adams created this Life Tributes page to make it easy to share your memories.

Armando Maldonado Adams went to be with the Lord on August 12,...

Send flowers to the Adams family.