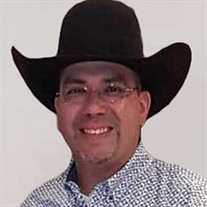 On Friday, February 19, 2021, Armando "JR" Jimenez went to be with the Lord at the age of 42 here in Del Rio. He was born on April 20, 1978 in Ciudad Acuna, Coah. Preceding him in death was his grandfather, Trinidad Jimenez and grandmother, Juana Rios. Armando was a beloved husband, father, son, brother, and friend to anyone he met. He lived life to the fullest spending time with this family and close friends, listening to music, and firing up his grill any chance he got. He was a very loving soul always hugging and kissing his wife and kids. There wasn't a stranger he met that didn't become his friend or a room he would walk in that he wouldn't have people laughing because he was cracking jokes. If you ever went to visit him, you better be prepared to stay for a long time because he was going to strike up a conversation and sit you at the table to join his family for a meal. He was a very humble person that always loved to help others just to see them smile. He was married to the love of his life, Julisa Jimenez for 22 years. They had three beautiful children, Clarissa Aleene Jimenez, Isaac Jacob Jimenez, and Aaron Matthew Jimenez. His wife and children were his pride and joy. Family members left to cherish his memory include his beloved wife, Julisa Jimenez; children, Clarissa Aleene Jimenez, Isaac Jacob Jimenez, and Aaron Matthew Jimenez; parents, Armando H. Jimenez and Blanca P. Jimenez; brother, Sergio Jimenez (Rebecca Serrano); sister Bianca Jimenez Roman (Mario Roman); grandmother, Benita Jimenez; In-laws, Raul Barrera Sr. and Norma L. Barrera; brother-in-law Raul Barrera Jr. (Leeshanti Barrera); brother-in-law, Alexis Barrera; nieces and nephews, Alyssa Jimenez, Joshua Garcia, Evelyn Jimenez, Emmalee Jimenez, Damian Villafranco, Aiden Roman, Xzavier Roman, Camila Roman, Olivia Roman, Devin Barrera, and Izzy Barrera; numerous aunts, uncles, cousins, and friends that became family. Pallbearers include: Juan Carlos Trevino, Angel Perez, Rey Garcia, Sergio Jimenez, Adolfo Cuellar, and Horacio De Hoyos Honorary pallbearers include: Robert Jimenez Jr., Luis Angel Perez, Adriel Perez, Louie Mares, Mario Roman, Raul Barrera Jr. and Alexis Barrera A visitation will be held on Friday February 26, 2021 from 5:00 p.m. - 9:00 p.m. A Mass will be held at Our Lady of Guadalupe Catholic Church on Saturday, February 27, 2021 at 2:00 p.m. Funeral arrangements are under care and direction of G.W. Cox Memorial Funeral Home, 114 Fletcher Drive, Del Rio, Texas. For more information you may contact us at (830)775-2000 or www.gwcoxmemorialfuneralhome.com

On Friday, February 19, 2021, Armando "JR" Jimenez went to be with the Lord at the age of 42 here in Del Rio. He was born on April 20, 1978 in Ciudad Acuna, Coah. Preceding him in death was his grandfather, Trinidad Jimenez and grandmother,... View Obituary & Service Information

The family of Armando "JR" Jimenez created this Life Tributes page to make it easy to share your memories.

Send flowers to the Jimenez family.