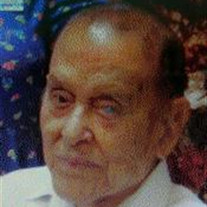 Arturo C. Gonzalez, 104 years young, went to be with Our Lord Jesus Christ Friday December 21, 2012. He passed away suddenly at his home. The family is celebrating his life and that he is now in the presence of Our Lord Jesus Christ. He was born in Del Rio, Texas on October 4,1908 to Sergio Gonzalez, Sr., and Genoveva Castro of Monte Morelos Nuevo Leon and Zaragoza, Coahuila Mexico. Arturo was raised by his godmother/madrina Macrina next to the family home on Las Vacas Street. He attended Guadalupe Catholic School and went on to Del Rio High School where he was a member of the Wildcats Baseball Club. He held a number of jobs including selling and unloading gas and working for Mr. and Mrs. Stool at The Guarantee. On December 31, 1931 he needed $5 to pay his voting poll tax and he asked his sister Eloisa if he could clean an empty lot she owned on Las Vacas Street. In March of 1932 after piling all the trash, mesquite trees, and weeds, he was preparing to burn all the trash when he noticed an old magazine, Mid-Week Pictorial where he saw an ad of the American Correspondence School of Law. This, he would say “was the beginning of a pleasant, truthful and joyful profession.” In 1933 Judge Brian Montague appointed him as Interpreter of the Court and he would go to court every day and sit in on trials and listen to all criminal and civil cases. “I learned from the school of actual experiences, from practical experience.” His main goal was to protect the poor so that they would not be taken advantage of and this he promised his madrina Macrina. Arturo was allowed to take the Texas State Bar exam after passing a college entrance exam. The Rotary Club of Del Rio loaned him $300 so that he could travel to Austin to study and take the State Bar, and he always felt a special gratitude to the Rotary for their faith in him. At that time the Bar exam took five days and was taken at the State Legislature. He received his license to practice law on February 27, 1935 after Judge Montague loaned him the $20 he needed to send to the State Bar of Texas to pay for his license. His first office consisted of one small room on the second floor of the Ross Building facing Canal Street above Ross Drug Store. Judge Montague loaned him furniture and law book, and allowed him access to the District Court library. Arturo became President of LULAC council #18 and their main goal was to develop public housing for the underprivileged in Del Rio. LULAC members, as well as Arturo, went door-to-door to obtain information from households about income, number of children, and education. His favorite Prayer was “Washington’s Prayer” which opened every LULAC meeting. The Del Rio Housing Authority was formed in the early 1950’s and Arturo was instrumental in getting the first federal grant and he was the Housing Authority’s first executive director. Arturo had a number of loves in his life besides his wife and children Arturo loved his AAA minor league baseball franchises and radio station XERF. He joined the Army on August 3, 1942 and was discharged on November 25, 1944. He enjoyed traveling to Cuba where his wife Blanca’s family was from but did not venture far from his law practice or present office on Pecan Street. He is survived by five loving children, Daisy & Sol (deceased) Arledge of Floyds Knobs, Indiana, Kathy and Bob Benson of Fort Worth, Arthur and Becky Gonzalez of Houston, Sergio and Diana Gonzalez and Blanca & Frank Larson of Del Rio. Grandchildren include Sol & Yvette Arledge; Diana, Greg, Jim and Kurt Benson; Eric, Monica, Rene and Miguel Gonzalez; America, Daisy and Sergio “Nene” Gonzalez; and Adrian and Chelsy Larson. Nieces and Nephews include Amalia Forehand, Jennie Owens and Joey Gonzalez. Great nieces and nephews and cousins include members of the Gonzalez, Hernandez, Guzman, Mireles, Owens, Phillips, Vara and Fuentes families. His favorite sayings are “How are you? No, you are better than yesterday and tomorrow you are going to be better!” “Como esta? Mejor que ayer y mañana vamos a estar mejor! And “We reap what we sow”! Pallbearers include Arthur J. Gonzalez, Sergio J. Gonzalez, Frank H. Larson, Adrian Larson, Rene Gonzalez, Jim Benson, Kurt Benson. Honorary Pall Bearers include Sol Arledge, Jr., Eric Gonzalez, Miguel Gonzalez, Greg Benson, Joey Gonzalez, Oscar Gonzalez, Arthur Gonzalez (Detroit), Maximo Herrada,Ricardo Guzman, Louis Owens, Mario Hernandez, Mario Barragan, Judge GeorgeThurmond, Billy Lewis, Jr., Judge Henry Fernandez and Judge Carl Pendergrass. Arturo is predeceased by his wife Blanca, his brothers and sisters, Sergio, Juanita, Sister Rose of Lima, Eloisa, Amalia and Raymond. Visitation will be this Sunday December 23, 2012 at G. W. Cox Memorial Funeral Home from 3-6pm with Rosary at 5pm. A Celebration Mass will be held at Sacred Heart Catholic Church Monday December 24th 2012 at 10am with a short ceremony at Sunset Cemetery’s Memorial Chapel. In lieu of usual remembrances the family requests that donations be made to the Rotary Club of Del Rio’s Scholarship Fund.

Arturo C. Gonzalez, 104 years young, went to be with Our Lord Jesus Christ Friday December 21, 2012. He passed away suddenly at his home. The family is celebrating his life and that he is now in the presence of Our Lord Jesus Christ. He was... View Obituary & Service Information

The family of Arturo C. Gonzalez created this Life Tributes page to make it easy to share your memories.

Send flowers to the Gonzalez family.