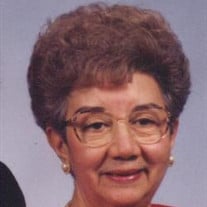 Berta Valdez Casillas entered eternal rest July 23, 2016 in Del Rio, Texas. She was born May 15, 1924 in Del Rio, Texas and was a lifelong resident. She is survived by her daughter: Marian Casillas, Ed.D; son: Ernesto Casillas, Jr.; brother: Ruben (Maria) Valdez; sister-in-law: Jessie Casillas from Big Spring, Texas; and numerous nieces and nephews. She was born and raised on Garza Street in the heart of San Felipe and lived all her life on Griner Street in the heart and soul of South Del Rio. She graduated from San Felipe High School and expressed steadfast and staunch “purple and gold” Mustang pride. She retired after 36 years in Civil Service working as a Secretary at Laughlin Air Force Base. She attended daily Mass at the Base Chapel and at Our Lady of Guadalupe Catholic Church where she was a faithful and fervent parishioner. In 1947 Father James Whelen, an Oblate of Mary Immaculate, was the pastor at Our Lady of Guadalupe Catholic Church and he began a group of the Legion of Mary, which is a worldwide Catholic organization. She was a founding member along with five other members. Presently there are two Legion of Mary groups in Del Rio: Mary Immaculate at St. Joseph Catholic Church and Natividad de Maria at Our Lady of Guadalupe Catholic Church, with a combined membership of 25 active members and 100 auxiliary members. Next year the Legion of Mary in Del Rio will be celebrating its 70th anniversary. She was a dutiful and dedicated member of the Legion of Mary, praying the Legion of Mary prayers and Rosary, attending the weekly meetings where she held various officer leadership positions and performing a variety of apostolic works throughout her life. She always wore her Miraculous Medal as a sign of her deep love and devotion to the Blessed Virgin Mary. She was preceded in death by her husband: Ernesto Casillas; parents: Apolonio and Paulita Garcia Valdez; sisters: Julia (Vicente) Jimenez and Alicia (Gregorio) Flores; brother: Raul (Gloria) Valdez; In-Laws: Antonio and Celia Casillas; brother-in-law: Luis Casillas; sisters-in-law: Gloria A. Valdez, Aida (Leo) Gonzalez. Pallbears are: Ernest Ruiz, Raul Valdez, Jr., Ruben Valdez, Jr., Timothy Valdez, Thomas Valdez and Everett Benjamin Valdez. One cannot do justice to a life, long and fully lived for 92 years, in merely a few words, sentences or paragraphs; but that is the extent of an obituary. Her life was truly a glorious experience with its joyful and sorrowful times and through it all the ever present luminous life with Our Lord Jesus Christ illuminating her earthly journey with faith and love, ever hopeful to return back to her Heavenly home forever. Visitation will be held on Tuesday, 6-9:00P.M, July 26, 2016 at G. W. Cox Memorial Funeral Home with a Bilingual Scriptural Rosary at 7:00 p.m. prayed by The Legion of Mary of the Del Rio Catholic Faith Community. Mass of Christian Burial at will be on Wednesday, 10:00A.M, July 27, 2016 at Our Lady of Guadalupe Church celebrated by Father Antonio O. Moreno. Interment will follow to Sacred Heart Cemetery. Funeral arrangements with G. W. Cox Memorial Funeral Home, of Del Rio LTD, 114 Fletcher Drive, Del Rio, Texas. 78840 Ph: 830.775.2000

The family of Berta V. Casillas created this Life Tributes page to make it easy to share your memories.

Send flowers to the Casillas family.