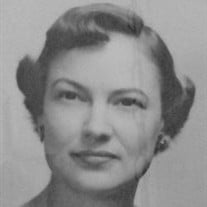 Bessie Mae Locker, our loving mother went on to her eternal reward in heaven with our Lord and Savior Jesus Christ on Saturday, October the 14th, 2017. Bessie was just about to turn 88 years old, however, God had greater plans for her in heaven. Bessie was born on November 5th, 1930 in Uvalde, Texas to C.D. “Carroll” and Hallie Mangum, "Pappy and Mur" to all of us children and kin. She was the second of three children Mur and Pappy would have. The family spent much time traveling from town to town as Pappy worked for the Texas Highway Department for many years until they came to Del Rio, Texas where the family settled down. She married her husband N.L. Locker just after his Pacific submarine service in W.W II. They were married for 56 years until N.L. passed in Jan. 2004. Bessie and N.L. had two children Duane Lloyd Locker and Debra Lynn Locker who both passed not long after their first month with them. However soon Bessie and N.L. would decide to adopt their two children at this time, her son, Larry Locker of Del Rio, Texas and daughter, Loye “Brandy” Locker Speakman now of London, Texas. Bessie and N.L. Were also blessed with a foster daughter, Elaine Mangum Chatfield now living in Salt Lake City, Utah who they raised after Elaine's parents Bessie's kin were killed in a car accident when she was just six years old. Bessie is also survived by her sister, Carolyn Hughes of Midland, Texas and her grandchildren Daniel Speakman, Jr. of San Antonio, Texas and Jason Speakman of Austin, Texas as well as Elaine's children Gregory Gipson and Chad Gipson. She had one deceased grandchild, Kenneth Gipson. She is survived by her brother in law Dayton Simpson of California City, California who married her now deceased oldest sister Geneva “Babe” Mangum Simpson, her sister in law Jean Loy Akins of Midland, Texas, her favorite uncle Tom Littleton from Devine, Texas who by the way is now 101 years old and counting; and by several nieces and nephews and many cousins. Bessie worked for the City of Del Rio where she spent many years helping to take care of her cherished city she would call home. She was the City Tax Assessor and Collector here in Del Rio and after several years also became the City Secretary of Del Rio. Bessie was honored with the “Key To The City of Del Rio” for her hard work and service for so many years. She made many friends over the years and worked under several different mayors and city managers in her over 40 years of service to Del Rio. Even after her retirement in the early 90's she was called upon many times by then employees and elected officials, asking for her wisdom and knowledge of the city blocks and just for her opinion on situations at hand. She served on the Val Verde Co. Appraisal District and also did volunteer work @ the voting polls. Bessie enjoyed painting as a hobby and was part of the Del Rio Art League. She was an active member of the Central Church of Christ, also a member of the New Century Club, Eastern Star, and VFW Ladies Auxiliary of Del Rio. She helped her husband N..L. caring for a number of crippled children, N.L. sent to the Shriner's Children's Hospital. She enjoyed outdoor time with her large Mangum family doing fishing, hunting, and camping in her earlier years. Bessie loved cooking and baking, making cakes for quite a number of people and events. She was well known for her special pineapple cake recipe which was so often requested. Bessie was a loving mother always putting her husband and children first, never ceasing to try to make sure we were always cared for above and beyond her duties. She had many friends, neighbors, and family who so loved her for her kind heart and willingness to help. Bessie will be missed by everyone who knew her! She loved and served so many in all her years. To our loving mother who always went far beyond her calling to be there for us, we just can not wait to be with you in heaven. There still is much life to live but the empty spot now in our lives is replaced by so much love and memories of the times we spent with such a wonderful person! Thank you so much to all the loving care of the home health workers at Maverick Home Health and her helpers Teresa Placido and Denise Garcia who cared for her. To her wonderful church family always there for her, her loving neighbors Bondred Derr, Martha Ruiz, the Smith family, and others. As well as her faithful friend and companion her miniature Doberman "Dynamite"! Pallbearers are Daniel Speakman, Jr., David Evans, Mike Peel, Dan Newsome, Joe Rubio, Jr., and Ralph Sinclair. Honorary Pallbearers Tom Littleton, Dayton Simpson, William "Billy" Peebles, Mike Hughes, Robert "Bob" Hughes, Jason Speakman, L.G. Taylor, George Johnson, and S.W. "Bill" Cauthorn. In lieu of usual remembrances the family suggests donations to the Shriner's Children's Hospital of your choice. Visitations will be on Thursday, October 19, 2017, from 5-8 pm at the G. W. Cox Memorial Funeral Home. Funeral services will be on Friday, October 20, 2017 @ Central Church of Christ; 402 W. Cantu Rd; Del Rio, TX at 11:00 a.m. followed with interment @ Westlawn Cemetery buried next to her husband and her babies. Funeral arrangements with G. W. Cox Memorial Funeral Home, of Del Rio LTD, 114 Fletcher Drive, Del Rio, Texas. 78840 Ph: 830.775.2000

Bessie Mae Locker, our loving mother went on to her eternal reward in heaven with our Lord and Savior Jesus Christ on Saturday, October the 14th, 2017. Bessie was just about to turn 88 years old, however, God had greater plans for her in heaven.... View Obituary & Service Information

The family of Bessie Mae Locker created this Life Tributes page to make it easy to share your memories.

Bessie Mae Locker, our loving mother went on to her eternal reward...

Send flowers to the Locker family.