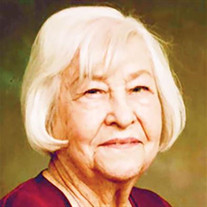 Saturday, September 29, Betty Ann Daniel Hollingsworth passed away quietly in the comfort of her home. Betty Ann, who was born in Del Rio, was the daughter of Charles N. Daniel and Leona Garrett Daniel. After graduating from Del Rio High School, she attended the University of Texas. In 1946, she married Thomas Edward “Eddie” Hollingsworth and upon his completion of printing collage, they joined her father in the operation of the Herald Printing Company. They had two children, Julieann, born in 1952, and Jody Abb, born in 1966. In addition to her time dedicated to the family owned business, she was an active participant in her Church, the PTA, Girl Scouts, 4-H Club, the Garden Club and was a lifelong member of The New Century Club. After 104 years the Herald Printing Company was closed and for a short time she managed the San Felipe Country Club. From 1998 to 2008 Betty Ann was the Administrator of the Del Rio Funeral Home. Upon her retirement, she became active in the Val Verde County Library. She was very proud when the citizens of Val Verde County approved bonds to renovate and expand the Library Facility and was pleased to see its expansion completed. She would also be humbled by the outpouring of love and concern shown by her many friends, for which her family is truly grateful. Betty Ann was preceded in death by her two sisters, Judy Lee and Barbara. She is survived by and will be greatly missed by her daughter Julieann and son Jody and their families; grandchildren Trey Abel and wife Tonya, Heath Abel and wife Erika, Garrett Hollingsworth and Morgan Hollingsworth, and great grandchildren Shelby, Elli, William, and Alex. Her family wishes to publicly express their gratitude for the truly beautiful care she received from Luz Maria Perez, Julia Flores and Tina Flores and the nursing staff of the Val Verde Regional Hospice. We shall always feel a debt of gratitude. The funeral for Betty Ann is a graveside service planned for Saturday the 6th of October at 3:00 p.m. In lieu of flowers donations may be made to the Val Verde Memorial Library.

Saturday, September 29, Betty Ann Daniel Hollingsworth passed away quietly in the comfort of her home. Betty Ann, who was born in Del Rio, was the daughter of Charles N. Daniel and Leona Garrett Daniel. After graduating from Del Rio High School,... View Obituary & Service Information

The family of Betty Ann Hollingsworth created this Life Tributes page to make it easy to share your memories.

Send flowers to the Hollingsworth family.