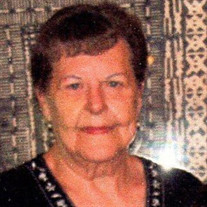 Betty R. Hayes, age 84, passed away peacefully on Friday, March 13, 2020 in Del Rio, Texas. Betty was born on April 1, 1935 in Quitman, Louisiana to parents Kermit and Robbie Rasberry. Betty worked as a Registered Nurse for about 40 years. She resided in Del Rio, TX since 1976. Betty was a very active member of the community and participated in organizations such as Meals on Wheels, Friends of the Library, Del Rio Study Club, and New Century Club. As pastimes she enjoyed bowling, and square dancing. She was also a devoted member of Northside Baptist Church. Betty is preceded in death by her beloved husband of 54 years, William J. Hayes; brother, Raymond Rasberry; and sister, Bonnie Settle. Family members left to cherish her family include her daughter, Cynthia R. Hayes; son, Michael D. Hayes and wife Candi; grandchildren: Sara Hayes, Leslie Tharp, Michael Tharp, and Miranda Hayes; sisters, Barbara Kennedy, and Caroline Kennedy and Husband Earl. Her final wishes were to be cremated. A memorial service will be held at a later date (TO BE ANNOUNCED) Funeral arrangements are under care and direction of G.W. Cox Memorial Funeral Home, 114 Fletcher Drive, Del Rio, Texas. For more information you may contact us at (830)775-2000 or www.gwcoxmemorialfuneralhome.com

The family of Betty R. Hayes created this Life Tributes page to make it easy to share your memories.

Send flowers to the Hayes family.