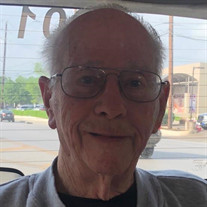 Bill is at peace with God, the pain is gone. He left us May 24th, 2019, after a brief confinement in NE Baptist Hospital in San Antonio, Texas. He was 93 years young! Bill was born December 1, 1925 in San Antonio, Texas. He attended schools there until graduation and entered the United States Navy serving in the Naval Air Force during World War ll. Bill was very dedicated to America and family. After an Honorable Discharge from the Navy he pursued a career in electronics taking him into the era of television! He spent his years until he retired in managerial positions for appliance and TV sales and service. It was in retail sales he met his wife of 55 years, Verna Lou Lausen. In 1970 the pair left San Antonio with two sons and moved to Del Rio, his wife's home. Bill loved West Texas and never wanted to move again. Bill had many miracles in his life, but his survival of prostate cancer and colon cancer is 2002 was continuance of 17 more years of life for him. In retirement Bill was a self-taught knife maker. Although it was a hobby to keep him active knife making became a way of life. He was challenged by the techniques and practices of fellow blades men and studied every thing he could find to develop his own trademark in the business. His knives have gone all over the world and he was always humbled by the results of his hard work. He donated many knives to charity, his favorite options for the knives. Many were sold bringing substantial funding for worthy causes! Bill was a member of Hermann Sons for more than 60 years. Bill was predeceased by his parents William and Cordelia Nyman, his sister Melba J. Cooper and his oldest son Richard S. Nyman. He is survived by his wife Lou, sons; Randy Nyman, Huntsville, TX, Thomas Nyman, son in law Kevin Parman, San Antonio, TX, David Nyman, fiancée Rhonda Stewart of Helotes, TX. Grandchildren; Courtney Torres, husband George, Jennifer Nyman, fiancée Mark Severson, Sydney Nyman, Laurie Gist, husband Zip, Kaitlyn Stewart and Reid Stewart, Niece, Dr. Debra Perrett and husband Rick, all of San Antonio and surrounding area, Niece, Dr. Jody Tower and husband Keith of Leavenworth, WA, Nephew, Michael Mclure and wife Michele of Blanco, TX, numerous great grand children. Graveside services were held May 29, 2019 in Westlawn Cemetery, Pastor Marvin Wood officiating. Bill requested no flowers please, but if you care to choose a living remembrance, charity of your choice or his favorite West Texas Boys Ranch, San Angelo, TX create miracles that never cease. May God bless the soul of Bill Nyman, may he rest in peace with God infinitely, may he shine in glory unto God now and forevermore in the holy name of Jesus we pray. Amen

The family of Bill Nyman created this Life Tributes page to make it easy to share your memories.

Send flowers to the Nyman family.