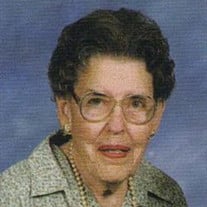 Carolyn DeViney, 94, passed away August 18, 2016 in Del Rio, Texas. Carolyn was born on August 24, 1921 in Flatonia, Texas to Ernest and Muriel Mason. Carolyn was the eldest of three sisters and they remained close throughout their lives enjoying talking, sharing and being together. Because her father was a school Superintendent, they moved several times as they were growing up including to Nixon and Staples. While living in Staples, she met a young man from Martindale named Bill DeViney. With encouragement from her parents Carolyn graduated early from high school. She continued her academic career at Southwest Texas State Teacher’s college, which is now Texas State University in San Marcos, Texas. After graduating from college, her first teaching position was in Monthalia, Texas. During WWII, Carolyn continued corresponding with Bill. Following the end of WWII, they were married in San Marcos, Texas on December 27, 1945. In 1946, their daughter Donna was born. While the family lived in San Marcos Carolyn taught in Staples. During this time, she continued her education and earned her Master’s Degree in Education. In 1956, the family moved to Del Rio, Texas where Bill continued his Civil Service career at Laughlin Air Force Base. Carolyn began teaching in the Del Rio Independent School District and taught for a total of 43 years as an elementary teacher and reading specialist. Carolyn loved her children and loved helping and watching them learn new things. Many local residents still hold her in high regard as their First grade teacher. She was very active in the First United Methodist Church in Del Rio. She taught Sunday school and played the piano for the children. Carolyn was an active member of Methodist Women, Del Rio music club, Delta Kappa Gamma, and the Study club. She was a natural pianist and played by ear and read music. She shared her gift of music with nursing home residents and with family and friends. Carolyn was a devoted wife of almost 65 years to Bill, when he passed away. She is survived by her daughter: Donna Adler of Sharp town, MD; grandson: Jason Beran and his family of Baltimore, MD; sister: Bonnie Ferguson of Gladewater, Texas; and several nieces and nephews. She was preceded in death by her husband: William DeViney and sister: Ernestine Brewer. Visitation will be Tuesday, 5-9:00P.M, with the family receiving visits from 5-7:00P.M, August 23, 2016 at G. W. Cox Memorial Funeral Home. Funeral service will be on Wednesday, 11:00A.M, August 24, 2016 at the First United Methodist Church with Reverend John Fluth officiating. Interment will follow to Sunset Memorial Oaks Cemetery. Funeral arrangements with G. W. Cox Memorial Funeral Home, of Del Rio LTD, 114 Fletcher Drive, Del Rio, Texas. 78840 Ph: 830.775.2000

Carolyn DeViney, 94, passed away August 18, 2016 in Del Rio, Texas. Carolyn was born on August 24, 1921 in Flatonia, Texas to Ernest and Muriel Mason. Carolyn was the eldest of three sisters and they remained close throughout their lives enjoying... View Obituary & Service Information

The family of Carolyn DeViney created this Life Tributes page to make it easy to share your memories.

Send flowers to the DeViney family.