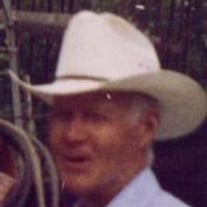 Charles M. "Buzz" Dolan October 19, 1924 - February 4, 2013 Buzz Dolan was born on the R. A. Brown Ranch in Throckmorton, Texas. He first rode a horse at age 3 and began breaking horses when he was 10 years old. He had a great passion for horses and the outdoors and spent his youth developing his skills as a horseman and a rancher. From Ozona to the Davis Mountains, Buzz worked on ranches and continued his love of horses at the Harris Ranch near Ozona, Texas. He served during World War II in the 10th Mountain Division during the Po Valley Campaign in Italy. His decorations from the campaign included: the American Theatre Campaign Ribbon, EAME Campaign Ribbon with 2 Bronze Stars, Good Conduct Metal, a Bronze Star Metal GO 53 10th Infantry, the 11th of April 1945 Victory Ribbon and the Overseas Service Bar. After the war, Buzz became an early and lifetime member of the PRCA and actively competed as a calf roper, bull dogger, steer and team roper throughout the United States for many years. He met his wife, Satchie, in Cheyenne, Wyoming, and they wed on February 16, 1953. The couple traveled extensively throughout the western United States until returning to the Brown Ranch. A son and a daughter were born during the next 3 years. They returned to Jackson, Wyoming to summer steers at a family ranch. Upon their return to Texas, Buzz leased a ranch near Eagle Pass, where he began to import Mexican cattle. He purchased La Palma Ranch in Coahuila, and operated a Hereford cattle and calf operation for 12 years; additionally, he raised quarter horses during this period. Many summers were enjoyed there with his wife and children. Two more daughters were born in San Antonio. The family relocated to Del Rio to facilitate being closer to Buzz's ranches. He had leased La Chuparrosa Ranch across the Rio Grande River that now is under Lake Amistad. Buzz was a member of the American Quarter Horse Association since R. A. Brown gave him his first stallion named "Ed's Blake Gold". This horse became the first of a vast number of registered quarter horses that he raised and trained. A very special honor was awarded to Buzz in 2008, when the Texas Ranch Roundup of participating ranches named Buzz as a "Texas Trailblazer", in recognition of his lifetime efforts in the cattle and ranching business. Buzz was quoted in "Livestock Weekly" as saying "Our way of cowboying; the way I learned, is almost gone, but the cowboy himself will never be gone". His legacy and memory will be forever cherished by all whose lives he touched. Preceding him in death were his son, Charles M. "Laddie" Dolan and his daughter Christine "Tina" Dolan. He is survived by his wife Satchie Dolan, his daughters Satchie S. Leighton and Charlotte "Cha Cha" Dolan, his granddaughter Satchie E. Leighton and numerous nieces and nephews. Graveside service will be celebrated on Friday, 11:00A.M, February 8, 2013 at Westlawn Cemetery with Gerald L. Prather, Chaplain, Maj. Gen., USAF (Ret.) officiating. Funeral arrangements with G. W. Cox Memorial Funeral Home, of Del Rio LTD, 114 Fletcher Drive, Del Rio, Texas. 78840 Ph: 830.775.2000

Charles M. "Buzz" Dolan October 19, 1924 - February 4, 2013 Buzz Dolan was born on the R. A. Brown Ranch in Throckmorton, Texas. He first rode a horse at age 3 and began breaking horses when he was 10 years old. He had a great passion for horses... View Obituary & Service Information

The family of Charles M Dolan created this Life Tributes page to make it easy to share your memories.

Send flowers to the Dolan family.