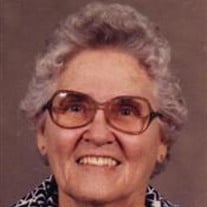 Clovis Estelle Harp Hinds, 93, passed away Friday, March 8, 2013. She was born March 14, 1919 in rural Rochelle, Texas to George William Harp and Henri Etta Adams. She moved to Del Rio, Texas after graduating high school and married Charlie Francis Hinds on January 30, 1939. They lived on various ranches around Del Rio and Comstock area except for a move to Portland, Oregon to work as welders in the shipyards during the war, before returning to Texas to ranch. During the drought of the 50’s she trapped fur for spending money on the Devil’s River Ranch, raised 3 children and made clothes for her and daughter. She loved to fish and always caught her share. In the 1960’s they moved to Comstock to send the children to school and later moved to Del Rio, after all the children were grown. She is survived by children: Thomas Robert Hinds and Mary Pauline Hinds Slover; daughter-in-laws: Janita Hinds and Martha Sue Hinds; grandchildren: Hettie Jo and Randy Hicks of Seminole, TX, Robert Cameron and Dana Hinds of De Soto, Kansas, Dean Slover and Dale Slover of Las Vegas, Nevada, Randel and Carol Dissler and Clay and Regina Dissler of Del Rio, and Kathy Lindley of Austin, TX; also, six great-grandchildren; and numerous nieces and nephews. She was preceded in death by her husband Charlie Francis Hinds, son: Charles Richard Hinds and son-in-law: Douglas Slover. Visitations will be on Sunday, 2-4:00P.M, March 10, 2013 at G. W. Cox Memorial Funeral Home Chapel. Funeral service will be at 4:00P.M, March 10, 2013 at same chapel. A Graveside service and interment will be on Tuesday, 10:00A.M, March 12, 2013 at Sunset memorial Oaks Cemetery. Funeral arrangements with G. W. Cox Memorial Funeral Home, of Del Rio LTD, 114 Fletcher Drive, Del Rio, Texas. 78840 Ph: 830.775.2000

The family of Clovis Estelle Hinds created this Life Tributes page to make it easy to share your memories.

Send flowers to the Hinds family.