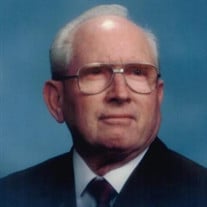 Collie S. Nalls, 88 of Fort Stockton, Texas passed away peacefully in his home on Thursday, October 28, 2021. He was the youngest child born on April 1, 1933 to Sarah Susie and Emmett Franklin Nalls of Colquitt, Georgia among his siblings:... View Obituary & Service Information

The family of Collie S. Nalls created this Life Tributes page to make it easy to share your memories.

Send flowers to the Nalls family.