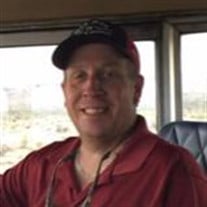 Danny Thompson Jr. Age, 47, passed away on April 16th, 2021. He was born on June 22nd 1973, in Corpus Christi, Tx to Danny Thompson Sr. And Debbie Reagan. He graduated from Calallen High school in 1991 and moved to Del Rio, Tx a few short years later when his dad gave the invite to come help with the family business “Thompson Tire”. Danny worked in the shop for a few years until meeting the mother (Jennifer Billings Thompson)of his two sons, Dylan and Caden Thompson. After the birth of his boys, he started his 19-year career with Union Pacific Railroad, as an Engineer. Despite the busy life of a railroader, he always made sure to keep time for his beloved family and close friends. He had many friends he left behind, that some would say were more like brothers. Neal Billings jr.,Jim Rosborough, Baye Wilson, Curtis Stock, Clint Lynde and Rick Harris just to name a few. Whether it was in the deer blind at Papaws hunting out at rough canyon with Caden or in the boat with Dylan fishing the shores of Lake Amistad, Danny always put his boys first and was always proud of his family name the boys carried on. The passion for loving life and loving his family comes from his father Danny Sr. who also loved lake Amistad. He is survived by his two sons, Dylan and Caden Thompson, significant other JJ Thompson. Cherished Step mother, Alma Thompson. His family, Neal, Angie, Hailey, Neal Edward and EJ Billings. A Memorial Service is scheduled for Monday, April 19, 2021 at 1030 a.m. at the First Christian Church. All are welcomed to attend to celebrate the Life of Danny Thompson, Jr.

The family of Danny Thompson, Jr. created this Life Tributes page to make it easy to share your memories.