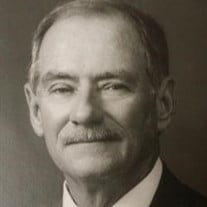 David Henry Krumm, 73, passed away August 28, 2014 in Del Rio, Texas. He was born May 7, 1941 in West Chester, Pennsylvania, son of David L. Krumm and Jayne Dickinson, David was the third of 5 siblings Jayne Conway, Elizabeth Krumm and younger brothers Henry and William (all surviving). Dave went to High School in Seaford, DE before joining the U. S. Navy. The Navy served him well, as it afforded him the opportunity to meet his future wife, Marie Palacios Krumm (surviving) after serving at Byrd Station in the Antarctic with RCA, Dave returned to Seaford with wife Marie to begin a new life with the Diamond State Telephone Company. An active member of the Lions Club and the American Legion, Dave was known to all. In 1978 the family transferred to Louisiana where Dave became known as the "Yankee converted to CoonAss" as the American Legion Post Commander. Working for South Central Bell, Dave was also active in the Lions Club and a member of the Krewe of Atlas while raising three children Lisa Krumm Anhaiser of Sugar Land, TX, Richard Herbert Krumm of New Orleans, LA and Joseph Dickinson Krumm of Del Rio, TX. While living in Mississippi, Dave heeded the call of retirement when he and Marie transferred to Del Rio, TX with Customs. As always, Dave was a man who never felt out of place. He never met a stranger, they were just friends he didn’t know yet. Dave couldn't just retire so upon moving to Del Rio he started Do-Tel Telecommunications. Through the business Dave became an active member in the Chamber of Commerce, but his true passion for service was for the benefit of the Lions Club and the Texas Lions Camp for Children. As a four year Century Club Key Holder for the Texas Lions Camp and Lions Club Past President, Dave was a tireless worker for the cause. Dave’s pride and joy showed in his love for grandchildren. His oldest grandson James L. Anhaiser Jr. is on active duty in the United States Marine Corps, stationed in New River, NC. Andrew David Anhaiser, student, is a USMC Reservist stationed in Galveston, TX. Youngest grandson Christian L. Anhaiser attends middle school in Sugar Land, TX where he resides with his daughter Lisa and “SIL", James L. Anhaiser SR. Dave has friends far and wide. With family still residing in Seaford, Dave returned 2 years ago with his son and brother to visit and hit the Dover NASCAR track, as well as trips to Mississippi and New Orleans to catch up with old friends. Dave is survived by his wife, children, SIL, grandchildren and a plethora of great friends from The beaches of Delaware to the borders of Texas. He was a good man, a dad, a Pepop and a friend and we will miss him dearly. Dave is proceeded in death by his parents and granddaughter Alexis Jayne Anhaiser with whom he will spend his eternity. Visitations will be on Wednesday, 4-6:00P.M, September 3, 2014 at G. W. Cox Memorial Funeral Home Chapel. Chapel service will follow visitations at 6:00P.M, with Deacon Claudio Sanchez officiating. In Lieu of usual remembrances please support your favorite charity. Funeral arrangements with G. W. Cox Memorial Funeral Home, of Del Rio LTD, 114 Fletcher Drive, Del Rio, Texas. 78840 Ph: 830.775.2000

The family of David Henry Krumm created this Life Tributes page to make it easy to share your memories.

Send flowers to the Krumm family.