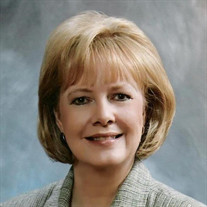 Deborah Ann Colburn (Hutto), age 70, passed away on July 2, 2021, following a battle with heart failure. She was born on December 30, 1950, in Rocksprings, TX to John Marvin Hutto and Margaret Helen Reed. She is preceded in death by her parents, John “Marvin” Hutto and Margaret Helen Hutto. She is survived by her daughter, Shannon Hicks (John) of San Marcos, TX; son Todd Colburn (Steve Lancaster) of San Antonio, TX; sister Beverly Hinds (Danny) of Lubbock, TX; and brother Chris Hutto of Del Rio, TX. Debbie grew up in a sheep and goat ranching family in Carta Valley, TX, where she initially attended the ranching community Carta Valley school, and later graduated from Del Rio High School. At the age of 19, she married her former spouse, Ronald Colburn. After some military assignments, they settled in Victoria, TX where both of their children were born. The family moved to Sanderson, TX in 1982, and she has lived back in her hometown of Del Rio, TX since 1988. She spent nearly 20 years running a child care center out of her home, and has spent the last decade as a licensed Texas Process Server, where she has enjoyed working with various law firm clients out of Val Verde and Bexar County. She loved ancestry research, visiting various spots in the Texas Hill Country with her children, old country music, and visiting her grand-dogs that were often first to get her hugs. She enjoyed being a protective big sister to her brother, Chris, and treasured their special relationship. She also greatly cherished her many friends. Visitation for family and friends will be held on Thursday, July 8, 2021 from 6:00 -7:00 pm at G.W. Cox Memorial Funeral Home. A graveside service will take place at the Carta Valley Cemetery on Friday, July 9th at 1pm, officiated by Pastor David Lee Murray of Brackettville, TX. Funeral arrangements are under the care and direction of G.W. Cox Funeral Home, 114 Fletcher Drive, Del Rio, Texas. In lieu of flowers, the family requests donations be given directly to the American Heart Association. The American Heart Association is a national voluntary health agency to help reduce disability and death from cardiovascular disease and stroke.

Deborah Ann Colburn (Hutto), age 70, passed away on July 2, 2021, following a battle with heart failure. She was born on December 30, 1950, in Rocksprings, TX to John Marvin Hutto and Margaret Helen Reed. She is preceded in death by her... View Obituary & Service Information

The family of Deborah Ann Colburn (Hutto) created this Life Tributes page to make it easy to share your memories.