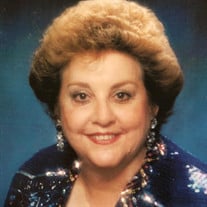 Our dear mother, Dolores “Cotis” Rodriguez Vasquez, lost her brief battle with pancreatic cancer on 8-26-18. Dolores was born to Amador and Antonia Martinez on October 17, 1937 in Laredo, Texas and was a proud graduate of Martin High School. Dolores married Gilberto Rodriguez and together they had four children. In 1963, Dolores’ husband relocated the family to Del Rio, Texas to manage a welding supply store that would supply the construction companies building Amistad Dam. Together with her husband, Gilberto, they purchased Del Rio Welder’s Equipment Company in 1976 and the family continues to operate the family business. A loving parent, Dolores involved herself in many of her children’s activities including Girl Scouts, Pee Wee Cheer and Del Rio High School Band Booster Club. Education was very important to her and she expected that her children would not just attend college but earn degrees. Her legacy of education was passed along to her grandchildren making it possible for all of her eleven grandchildren to attend college. Our mother was a great friend and would regularly get together with her Laredo girlfriends who resided in Del Rio. She enjoyed her Martin High School reunions and spoke highly of her dear friends in Laredo. Our mother was the keeper of family traditions. They included making sure that deceased family members would always have flowers on their graves. She made sure that her children would continue this tradition. Dolores served as a volunteer member and officer of the Texas Association of Hospital Auxiliaries “Pink Ladies” for many years, belonged to the Court of St. Joan of Arc Catholic Daughters of America and served as a Hospice volunteer. Dolores was a woman of great faith and always put God first. We send her on her journey with love and appreciation for her wonderful life. We are comforted in the assurance that we will meet again in joy and laughter. Dolores was preceded in death by her parents, Antonia and Amador Martinez, brothers Tesoro and Amador Martinez Jr., husband Gilberto Rodriguez and husband Adolfo Vasquez. She is survived by her sister, Francisca Hanson, brother Juan Martinez, daughters Diana (Roland) Aguirre, Maricela (David) Williams, sons Gilberto (Genevieve) Rodriguez, Carlos (Diana) Rodriguez, 11 grandchildren, Gilbert (Roxana) Rodriguez, Robert Aguirre, Alan (Vanessa) Rodriguez, Dante Rodriguez, Rene Aguirre, Rebecca Aguirre, Reina Rodriguez, Riana (Jonathan) Monsalve, Regina Rodriguez, Natalie Williams, Mia Williams, 6 great grandchildren Levi Rodriguez, Isabelle Rodriguez, Gilberto Rodriguez IV, Franciella Rodriguez, Celeste Hernandez, Janet Hernandez numerous nephews and nieces.

Our dear mother, Dolores &#8220;Cotis&#8221; Rodriguez Vasquez, lost her brief battle with pancreatic cancer on 8-26-18. Dolores was born to Amador and Antonia Martinez on October 17, 1937 in Laredo, Texas and was a proud graduate of Martin... View Obituary & Service Information

The family of Dolores Rodriguez Vasquez created this Life Tributes page to make it easy to share your memories.

Send flowers to the Vasquez family.