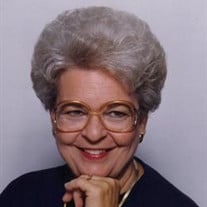 Doris L. Alvey passed away April 19, 2014 in Schertz, Texas. She was born in Idalou, Texas on August 9, 1936. The day following her 15th birthday, she married Jimmie Lee Alvey who she always referred to as her one and only true love. Doris is... View Obituary & Service Information

The family of Doris L. Alvey created this Life Tributes page to make it easy to share your memories.

Send flowers to the Alvey family.