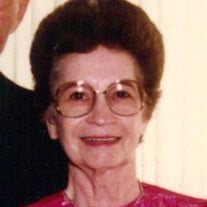 Dorothy Vivian (Shelnutt) Gabbert passed away July 30, 2017. Dorothy was born June 05, 1921 in Atoka County, Oklahoma to Lonzo F. and Lela (Jones) Shelnutt. She married J. E. Gabbert August 10, 1940 in Clyde, Callahan County, Texas. They moved to Del Rio, Texas in 1943 where they lived out the remainder of their lives. Dorothy was active in the community and she was involved in the Del Rio Art League for many years. She enjoyed serving in the North Heights School P.T.A, as well as other organizations involving her children. She was a self taught seamstress who enjoyed teaching sewing when she worked at the singer store. She often sewed for "the public" and she made most of the clothes that her children wore. Dorothy especially treasured the many years spent working for Dr. Portales and often referred to that period of her life when speaking with others. She and her husband, Jay loved to travel in their early years and they enjoyed many hours spent with friends and family. She attended the First Christian Church of Del Rio. Dorothy is survived by two daughters; Darlene Jolly and her husband, Roy, and Carole Ann Baiarrio; 5 grandchildren, Jeffery Lynn Jolly and his wife, Kathy, Lisa Gayle (Jolly) Sykes and her husband, Bobby, Mark Randall Jolly, Anthony Baiarrio, Brady Baiarrio and his wife, Desere; 9 great grandchildren, William Reed Sykes and his wife, Megan, Nathan West Sykes, Grant Thomas Sykes, Courtney ann (Jolly) Fonda and her husband Zachery, Joshua Roy Jolly, Toby Baiarrio, Braden Baiarrio, Logan Baiarrio, and Isabella Rose Baiarrio. She is also survived by her brother, Eston Shelnutt and his wife Nell, her sister, Wilma Beasley, and numerous cousins, nieces and nephews. Mrs. Gabbert was preceded in death by her husband, J. E. Gabbert; her parents, Lonzo and Lela Shelnutt, as well as one son, Lonnie Jay Gabbert. In lieu of usual remembrances, Memorials may be made to the First Christian Church of Del Rio, Texas or a charity of your choice. Honorary Pallbearers will be her grandsons and great grandsons. Visitations will be held on Friday, 6-8:00P.M, August 4, 2017 at G. W. Cox Memorial Funeral Home. Graveside service will be held on Saturday, 10:00A.M, August 5, 2017 at Sunset Memorial Oaks Mausoleum, entombed with her husband of 69 years, J. E. Gabbert who died November 06, 2009. Officiating will be Reverend John Cary. Funeral arrangements with G. W. Cox Memorial Funeral Home, of Del Rio LTD, 114 Fletcher Drive, Del Rio, Texas. 78840 Ph: 830.775.2000

The family of Dorothy Vivian Gabbert created this Life Tributes page to make it easy to share your memories.

Send flowers to the Gabbert family.