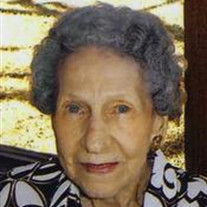 Dorothy Nell Medlock is now tickling the ivories on a special piano in Heaven. She passed away peacefully on Thursday, December 6, 2012. Her survivors include daughter Dina Lee Marshall and son-in-law Roy B. Marshall of Tucson, Arizona, her grandson Aaron R. Marshall, his wife Camille and great grandsons Calvin and Eli of Durango, Colorado; her granddaughter Stacey, great-grandchildren Adaline and Roan of Portland, Okalahoma. Dorothy was born in Comanche, Texas and moved to Del Rio as a young child and soon started playing the piano after hearing her older sisters practice. It must have been a union made in heaven as she quickly picked up tunes and could play them with unusual skill. Music then became a central focus of her life. Two years of early piano lessons were not well received by Dorothy Nell and from the age of 10 or 11. She was self-taught, relying on her own talents and tenacity. At 16, she started playing for the studio of dance run by Mary Rose Hoover. Other musical opportunities soon presented themselves as her reputation grew. Wedding became her forte, and she was soon known as the person to call for excellent piano music. Well over 200 couples were happy to have her display her talents for their special day. She also played for numerous church services, staring with the piano and later the organ (self-taught). During WWII Dorothy Nell went to work for the Southern Pacific Railroad as a clerk. It was there that she met her future husband, George Medlock, as engineer for the Southern Pacific. In the years after their marriage, she was especially proud of being a lifetime member of Del Rio music club. Dorothy Nell had connections to most of the musical events and personalities in Del Rio. She played the organ in the Brinkley Mansion many times and always considered it a special instrument and one she truly enjoyed. She also appreciated Blondie Calderon and his musical talents. They were very much alike in their ability to hear something, then play it as well or better then the original artist. To hear those two entertain each other on a piano was a real joy. In her later years one of Dorothy Nell’s treats was a trip to Memo’s Restaurant every Friday. After a light lunch, she would start playing on Blondie’s piano and continue for 90 minutes with no breaks. Dorothy Nell loved and was loved by many over the years. She was a true icon in Del Rio and one that will be missed. Many have wondered how old she was, as she would never reveal her age. Suffice it to say that she was born on August 26, 1915 and enjoyed a long, determine, and beautiful life. In lieu of usual remembrances the family request donations be made to the Hospice of Val Verde, the Val Verde library, or a charity of choice. Visitations will be held on Sunday, 5-9:00P.M, December 9, 2012 at G. W. Cox Memorial Funeral Home Chapel. Chapel service will be on Monday, 10:00A.M, December 10, 2012 at same chapel. Interment will follow to Westlawn Cemetery. Officiating the celebrations will be Reverend Joe Walts of San Antonio, Texas.

Dorothy Nell Medlock is now tickling the ivories on a special piano in Heaven. She passed away peacefully on Thursday, December 6, 2012. Her survivors include daughter Dina Lee Marshall and son-in-law Roy B. Marshall of Tucson, Arizona, her... View Obituary & Service Information

The family of Dorothy Nell Medlock created this Life Tributes page to make it easy to share your memories.

Dorothy Nell Medlock is now tickling the ivories on a special...

Send flowers to the Medlock family.