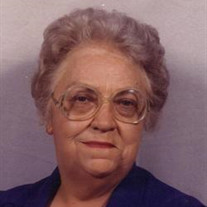 Dorothy Marie Nelson, 89, of Del Rio, Texas, passed away April 28, 2017, in Del Rio, Texas. Dorothy was born in Steger, Illinois to Harold and Etta Fuller on February 8, 1928. She went to Bloom High School where she met the love of her life, Richard Earl Nelson. Richard and Dorothy and 2 daughters, Deborah and Gayle, relocated to Kerrville, Texas in 1955. A third daughter, Ellen, was born in Kerrville. The family finally ended up in Del Rio where Gayle opened The Little Schoolhouse. Dorothy worked in the school since its beginning in 1973. She taught Kindergarten and worked as the financial secretary, and any other jobs that needed to be done. Dorothy blessed many, many students over the years. Her kind ways comforted them and when necessary her serious words to them made them rise above their problems and move on. Thousands of students remember their days at The Little Schoolhouse and how Mrs. Nelson was there for them. Dorothy was a member of the Quilters Club in Del Rio. She created many beautiful quilts over the years and won many prizes. The quilts she made for each family member will always be treasured. Dorothy and Richard were also members of the Del Rio Antique Car Club. They loved to travel to car events all over Texas. Dorothy had many other interests. Learning the computer at 80, she checked her Facebook page daily. She loved to learn. Her favorite was TV channels where she could learn something new. Dorothy is survived by her sister Vern Bub; niece Darlene Singleton and nephew Daniel Bub; and her brother Raymond Fuller and niece April Brown; daughter Ellen Quiqq and grandson Raymond Jr. and daughter Deborah Manning and granddaughter Aarin Farrell; Great-Grandchildren, Titan Quiqq, and Addison, Caden and Avery Farrell. Condolences may be left on Dorothy's online guest page at the G. W. Cox Memorial Funeral Home website. Visitations will be on Friday, 8:30-10:00A.M, May 5, 2017 before Chapel service. Chapel service will be Friday, 10:00A.M, May 5, 2017 at G. W. Cox Memorial Funeral Home. Interment will follow at Westlawn Cemetery, Funeral arrangements with G. W. Cox Memorial Funeral Home, of Del Rio LTD, 114 Fletcher Drive, Del Rio, Texas. 78840 Ph: 830.775.2000

Dorothy Marie Nelson, 89, of Del Rio, Texas, passed away April 28, 2017, in Del Rio, Texas. Dorothy was born in Steger, Illinois to Harold and Etta Fuller on February 8, 1928. She went to Bloom High School where she met the love of her life,... View Obituary & Service Information

The family of Dorothy Marie Nelson created this Life Tributes page to make it easy to share your memories.

Send flowers to the Nelson family.