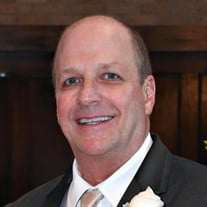 Douglas Roger Williams, 62, of River Ridge, Louisiana, passed away peacefully on December 7th, 2021, at his favorite place on earth, The Williams’ Ranch. Doug graduated as valedictorian from Stuart Prep School in 1977 where he was also a star basketball player and starting pitcher. Doug retired in 2015 from Topaz of Louisiana after 28 years of hard work. Doug raised his children in Denham Springs, Louisiana and he was a dedicated and loving father, frequently seen cheering his kids on at all their sporting events and endeavors over the years. He was especially proud of all his children’s dedication to their education and that each one of them attended college and graduated with their bachelor’s degrees. Doug loved spending time at the family ranch, hunting, fishing, taking boat rides on the creek, singing in the choir at First United Methodist Church of Denham Springs, and playing poker and basketball with his buddies. Doug was also a proud grandfather—known to his grandchildren as Gramps. He loved attending their sporting events, singing them nursery rhymes, and in true Gramps style, made sure to teach them the rules of poker. Doug was always a true gentleman, making everyone around him feel comfortable. He had a contagious smile and a deep belly laugh. He gave the best bear hugs and advice. He would truly give the shirt off his back to anyone in need. He was a man of the Lord and had a true love for a good time with family and friends. He will always be remembered as an amazing dad and friend. Doug is preceded in death by his parents Robert ‘Bob’ Louis Williams II, Georgia’Louise’Briggs Williams; and his brother Robert ‘Bobby’ Louis Williams III. Doug is survived by his partner and best friend, Caren Amacker; brother Robert Louis ‘Rob’ Williams IV; former wife and mother of his children, Carlea F. Betancourt; his children Jeremiah Douglas Williams, Ashley Louise Williams Smith; Heather Marie Williams Tallo; and Jake Roger Williams; Daughter-in-law Lori Williams; son -in -laws Chase Smith and Kyle Tallo; He is also survived by 9 grandchildren: Bryson Smith, Briggs Tallo, Elijah Smith, Liliana Tallo, Ethan Williams, Emma Kate Smith, Gabriella Tallo, Ronni Ann Williams, and Brody Tallo. Visitation and Hymns of Praise will be on Thursday, December 16, 2021 from 5 p.m. to 9 p.m. A Graveside Celebration of Life, Death & Resurrection will be Friday, December 17, 2021 at 2 p.m. on the The Williams' Ranch: 5319 Mudcreek Rd., Brackettville, Texas 78832. Flowers may be sent to the funeral home. In lieu of flowers donations can be made to the Barbara Hill Music Scholarship Fund.

Douglas Roger Williams, 62, of River Ridge, Louisiana, passed away peacefully on December 7th, 2021, at his favorite place on earth, The Williams&#8217; Ranch. Doug graduated as valedictorian from Stuart Prep School in 1977 where he was also... View Obituary & Service Information

The family of Douglas Roger Williams created this Life Tributes page to make it easy to share your memories.

Send flowers to the Williams family.