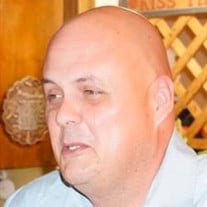 On August 27th, 2017 at 2:40, Dub Alfred Dawson, beloved husband, brother, son, uncle and friend was called home to be with his creator and loved ones. He was born Dub Alfred Dawson August 20, 1973 in Corpus Christi, Texas to the late Retired Texas Ranger Toliver "Tol" Dawson of Del Rio, Texas and Dorothy Ellis Dawson of Odessa, Texas. When he was born he came into the world ahead of a hurricane and he left this world with one. He was preceded in death by his parents and grandparents on both sides. He leaves behind a beloved wife Dorothy Dansby Dawson, sister Verna Jean Dawson, nephew Reese Dawson and his wife Sarah and great nieces Bailey Rose and Emma Grace and great nephew Benjamin Colt. Best friends David Sanchez of Georgetown, Texas, Wade Ott of San Angelo, Texas and Ron Kennedy of Del Rio. And not to mention endless friends and extended family that will miss him dearly. Dub was a quiet child with a huge voice. He graduated from Del Rio High in 1992 and was in choir. He had a voice of an angel. He could be coaxed to sing karaoke sometimes. After his marriage to Dot in 2013 he would sing Josh Turner's "I wanna be your man" which was their wedding song. He was an avid fisherman and hunter. To prove this point he took Dot to Rockport, Texas for their honeymoon to go fishing. If there was water in a spot he would catch a fish. One of his biggest catches was a 9 foot alligator gar on 10 pound test line. It took him 3 hours to get it up on the bank. He was extremely proud of that catch; so much so that he called and woke his sister up at 2 am to come and take pictures of it. He and David measured it and then let it go. That big fish story actually had proof. He belonged to the Del Rio Dart League Association for several years and had recently started doing leather work again and wood turning. Memorial service will be held September 2nd, Saturday at 12:00 Noon, at G.W. Cox Memorial Funeral Home Chapel, 114 Fletcher Drive, Del Rio, Texas. 78840 phone 830-775-2000 Funeral arrangements with G. W. Cox Memorial Funeral Home, of Del Rio LTD, 114 Fletcher Drive, Del Rio, Texas. 78840 Ph: 830.775.2000

On August 27th, 2017 at 2:40, Dub Alfred Dawson, beloved husband, brother, son, uncle and friend was called home to be with his creator and loved ones. He was born Dub Alfred Dawson August 20, 1973 in Corpus Christi, Texas to the late Retired... View Obituary & Service Information

The family of Dub Alfred Dawson created this Life Tributes page to make it easy to share your memories.

Send flowers to the Dawson family.