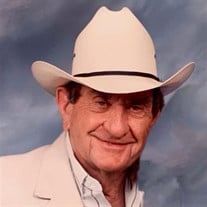 E.A. Davis 98, longtime area rancher passed away in Del Rio, Texas on Thursday, November 4, 2021. He was born on March 31, 1923 in Del Rio to Florie Gallaway Davis and Emery Lee Davis who were both from pioneer ranching families. He was preceded in death by his parents, the mother of his children Cornelia K. Davis, his second wife Joye Smith Davis, sisters Beatrice Newman Lowry and Elvie Davis Turney and nephew Clifton Bee Lowry. Left to cherish his memory are Van Davis, Janalee Davis Fulps (husband Don), Darrell Davis (wife Brenda). Other survivors are his grandchildren, Buckley O’Block, Jason Davis, Justin Davis, Kelly Jo Davis Schnpp, Shera Lee Davis Hickman, James Drew Fulps, Amy Davis, Evangelina Davis, and eleven great grand children. E.A. was a Mason and a member of the United Methodist Church. In past years he was a member of the Texas Sheep & Goat Raisers Association, National Cattleman’s Beef Association, Texas Farm Bureau, American Quarter Horse Association, Civil Air Patrol, Southwest and International Flying Club and he served as President of the West Texas Egg Producers Association. He learned the value of hard work while gathering livestock on horseback, doctoring livestock for screwworms, working on fences, water wells and pipelines on the family ranch. The Davis family received a Texas Family Land Heritage award given to families whose properties have been in continuous agriculture production for 100 or more years. His strong work ethic led to him becoming very successful in his business endeavors. In 1953, during the drought of record, E.A. started an enterprise at his ranch that was to eventually become Flying D Eggs Inc. Over the years the operation continued to grow until it included state of the art egg processing and storage facilities, a feed mil and over 210,000 laying hens. Flying D marketed fresh eggs all over the Texas Hill Country as well as South and West Texas. E.A. was interested in aviation from the time he was six years old when in 1929 his father became the first local person in Val Verde County to own their own airplane. E.A. eventually got his own pilots license and accumulated over 6,500 hours of flying time. During this time he owned several different airplanes and even did some crop dusting when he was a young pilot. A graveside service will be held at the Masonic Cemetery in Del Rio on Thursday, November 11, 2021 at 10:30 am. Please join us for a reception, lunch, and celebration of E.A.’s life at 12:00 pm at the Whitehead Memorial Museum. The family wishes to extend sincere gratitude to all of the management and staff at Southwest Assisted Living for the wonderful care and compassion shown to E.A. and his family. Memorials can be made in E.A.’s memory to The First United Methodist Church in Del Rio, or a charity of your choice. Funeral arrangements are under care and direction of G.W. Cox Memorial Funeral Home, 114 Fletcher Drive, Del Rio, Texas. For more information you may contact us at (830)775-2000 or www.gwcoxmemorialfuneralhome.com

E.A. Davis 98, longtime area rancher passed away in Del Rio, Texas on Thursday, November 4, 2021. He was born on March 31, 1923 in Del Rio to Florie Gallaway Davis and Emery Lee Davis who were both from pioneer ranching families. He was preceded... View Obituary & Service Information

The family of E.A. Davis created this Life Tributes page to make it easy to share your memories.

Send flowers to the Davis family.