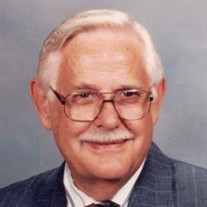 Reverend Edward Goodwyn Eskew, known affectionately as Pastor Eddie, of Del Rio, Texas, went to be with his Lord and Savior Jesus Christ on Friday morning, January 19, 2018. He is preceded by his beloved wife of 70 years, Myrtice Woodruff Eskew, his father John Burgess Eskew and mother Ethel Miller Eskew, his brother Frank and his wife Eva, and numerous nieces and nephews. He is survived by his daughter Ethelene (Lene) Baker and her husband Glenn, of Hurst, Texas, his son Jimmy Eskew and his wife Joy, of Grapevine, Texas. Also survived by granddaughters Jan Hulse and husband Craig, Diana Parkhill and husband Bryan, great grandchildren Cassidy Carter, Kennedy Hulse, Lyndel Parkhill, Hayden Parkhill, and Greyson Parkhill. Pastor Eddie was born on February 7, 1926 in Carrollton, Georgia. Growing up during the Great Depression, he learned a good work ethic and the value of trusting God by following his father’s example. He served in the Marine Corps in World War II, remaining stateside during his service. He was honorably discharged in 1945. He married Myrtice Woodruff on August 1, 1944. Pastor Eddie began his business career in Atlanta, and with promotions transferred to Charlotte, N. C., then to Corpus Christi, Texas and finally San Antonio, Texas. While in San Antonio, Pastor Eddie and Myrtice were active in Trinity Church where he was an ordained elder. In 1987, he accepted the call as full-time pastor and founded Grace Community Church in Del Rio. He served as pastor until his retirement in March 2004. He is widely known for his friendly greeting to everyone: “This is the best day of your life!” He never met a stranger. Pastor Eddie served faithfully his calling to minister as he held church services weekly at his home in the Southwest Assisted Living facility. He held services until his bout with pneumonia in December 2017. Beloved Pastor Eddie will be missed by everyone who knew him. He was dearly loved by all. Viewing will be on Monday, January 22 from 6:00 to 8:00 at the G. W. Cox Memorial Funeral Home. The celebration of Pastor Eddie’s life will be Tuesday, January 23, 11:00 am at Living Stone Worship Center, 190 Western Drive, Del Rio with Reverend Allen Randolph officiating. Interment will follow at Sunset Memorial Oaks Cemetery. Funeral arrangements with G. W. Cox Memorial Funeral Home, of Del Rio LTD, 114 Fletcher Drive, Del Rio, Texas. 78840 Ph: 830.775.2000

Reverend Edward Goodwyn Eskew, known affectionately as Pastor Eddie, of Del Rio, Texas, went to be with his Lord and Savior Jesus Christ on Friday morning, January 19, 2018. He is preceded by his beloved wife of 70 years, Myrtice Woodruff Eskew,... View Obituary & Service Information

The family of Reverend Edward G. Eskew created this Life Tributes page to make it easy to share your memories.

Send flowers to the Eskew family.