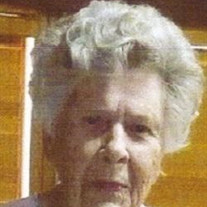 Emily L. Hensley, 101 years old, passed away November 3, 2015 at her home at Chaparral Townhouses, Del Rio, Texas. She was born in Cleburne, Johnson Co, Texas on September 8, 1914. Surviving are four daughters: Mrs. Pat Hobrecht of Del Rio, TX, Mrs. Linda K. Coltrane and husband Neal of N. C, Mrs. Harriett Wallen and husband Tommy of Del Rio, TX and Mrs. Andy McCulley and husband Bobby of Del Rio, TX; also, 5 granddaughters; 2 grandsons; 4 great-granddaughters; and 7 great-grandsons. Mrs. Hensley moved to Del Rio in June of 1964 with her husband Marvin E. “Buck” Hensley and four daughters transferring from Tucson, Arizona to Del Rio as Chief Patrol Inspector for the U.S. Border Patrol. She was a kind, loving and devoted wife and mother whose concern was for her family and friends first. In her younger years she was active in the Buena Vista Garden Club, President of NARF, National Association of Retired Federal Employees and a member of Piece Maker Quilters. If you didn’t find her at home working in the yard or in the kitchen whipping up something delicious you might find her at the feed store getting deer corn to feed the multitude of deer in her back yard or out on the lake fishing. All of these things were her passion. Mrs. Hensley was preceded in death by her husband: Marvin E. Hensley, her mother and father: Andrew P. and Erie H. Smith and one brother: Wylie P. Smith. Visitation will be on Friday, November 6, 2015, 5-9:00P.M, family to received friends 5-7:00P.M, at G. W. Cox Memorial Funeral Home. Chapel service will be on Saturday, November 7, 2015, 10:30 A.M, at G. W. Cox Memorial Funeral Home Chapel with Pastor R. G. Murray officiating. Interment will be at Rosehill Cemetery, Cleburne, Texas on Monday, November 9, 2015 10:00A.M. Funeral arrangements with G. W. Cox Memorial Funeral Home, of Del Rio LTD, 114 Fletcher Drive, Del Rio, Texas. 78840 Ph: 830.775.2000

The family of Emily L. Hensley created this Life Tributes page to make it easy to share your memories.

Send flowers to the Hensley family.