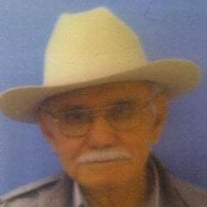 Henry A. Avila Sr. entered into eternal rest on February 23, 2016. Henry was a Purple Heart recipient and good man. Born on January 25, 1923 in Brackettville, Texas, to Andres and Juanita Avila, he was one of six children. He spent his youth in Brackettville and Fort Clark, where he worked odd jobs, before enlisting in the army. He honorably fought in World War II with the Fifth Army Infantry, 88th Division and led off to North Africa and Italy, where he was wounded by enemy fire outside of Naples. After returning from war, he married his bride Irene R. Avila. They married on June 30, 1946 and a year later, a son, Henry A. Avila, Jr. was born. Henry and Irene settled in Del Rio, Texas, where Henry befriended just about everyone he met. Whether in line at the post office or waiting patiently for his wife at a department store as she tried on clothing, he always struck up conversation with others as he was genuinely interested in learning each person's story. He loved nature and animals; he could grow anything from a seed, including calabaza and cilantro, and raised chickens and other animals so well that they outlived their lifespans. He beautifully restored furniture and fixed broken radios, lamps and other kicked-to-the-curb items, both as a pastime and for a living. He was a hard worker and worked with City of Del Rio, Del Rio Loan Co., and Sam Swinson. He served as a volunteer usher at Sacred Heart Church and did meaningful work with churches in Eagle Pass/PiedrasNegras. Henry is survived by his devoted wife of nearly 70 years, son, grandchildren and great-grandchildren--all who consider Henry their personal hero. Visitations will be on Thursday, February 25, 2016 from 5-9:00P.M, with a Rosary at 7:00P.M, at G. W. Cox Memorial Funeral Home Chapel. Funeral Mass will be on Friday, February 26, 2016 at 2:00P.M at St. Joseph’s Catholic Church. Interment will follow at Veteran’s Cemetery, Brackettville, Texas. Military honors will be presented. Funeral arrangements with G. W. Cox Memorial Funeral Home, of Del Rio LTD, 114 Fletcher Drive, Del Rio, Texas. 78840 Ph: 830.775.2000

Henry A. Avila Sr. entered into eternal rest on February 23, 2016. Henry was a Purple Heart recipient and good man. Born on January 25, 1923 in Brackettville, Texas, to Andres and Juanita Avila, he was one of six children. He spent his youth... View Obituary & Service Information

The family of Enrique Alvarado Avila Sr. created this Life Tributes page to make it easy to share your memories.

Henry A. Avila Sr. entered into eternal rest on February 23,...

Send flowers to the Avila family.