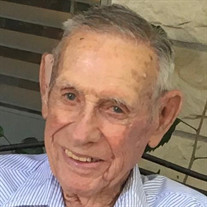 Francis A. (“Hank”) Skehan, of Comstock, passed away in Ozona, Texas on Wednesday, December 11, 2019. He was born in Houlton, Maine on April 15, 1927 to James and Mary Effie Skehan. Hank married Mary Pat (Patty) Zuberbueler in Del Rio, Texas on June 5, 1954 and they spent almost 60 years together. They raised two children, James Emil (Jim) and Mary Louise. In 1944, after high school, Hank enlisted in the United States Coast Guard and was assigned to the USS Monticello AP-61. The ship was used to transport troops from the USA to Italy and France. After discharge from the Coast Guard, he returned to Houlton and began taking flying lessons under the GI bill. In 1952, Hank joined the Border Patrol, with his first station being as a Patrol Inspector in Comstock, Texas, where he remained for three years. In 1955, having continued to build flying time, he was detailed to air operations in Brownsville, headquarters for the Border Patrol transport aircraft, later also being based in Brownsville, El Paso, Del Rio, and Grand Forks, North Dakota. During his Border Patrol pilot transport career, Hank and his fellow pilots transported illegal aliens for the Border Patrol and criminal and mental patients to Europe for the US Government. He flew 26 trips to Europe (most of those being in an unpressurized DC-4 aircraft), two trips to Central and South America in a DC-3, and two trips to the Far East. In addition, as chief pilot, he and his crew were the first plane to transport inmates by plane from Alcatraz upon its closing to other maximum-security prisons in the US. He was also the pilot of the first support plane to go into Oxford Mississippi during the 1962 riot. From 1970 to 1972, the Border Patrol started phasing out the transport airplanes and he chose Del Rio as his destination. There he flew single-engine airplanes, his favorite being a Super Cub, until his retirement in 1977. He flew for the Border Patrol for 22 years and clocked a total of about 19,000 hours flying time. Over the years, Hank received certificates of commendations, special awards, letters of appreciation, and certificates of honor for outstanding service. The different airplanes he flew were: C-47, C-46, C-45; DC-3, DC-4, DC-5, DC-6, DC-7; Convair 330 and 430; de Havilland Beaver amphibious plane; Super Cub; Cessna 180; Cessna 182; and Cessna 185. He was a flight instructor for the C-46 and the C-440. Upon his retirement, he took over ranching operations in Kinney and Val Verde Counties, flying his own Super Cub for rounding up and checking the ranch, as well as doing the same for other area ranchers. Through all of this, he and Patty were very supportive of all of the activities of their children, grandchildren, and great-grandchildren and were constantly traveling to games, rodeos, stock shows and friends’ and family events. Hank was preceded in death by his parents, wife Mary Pat, brother Joseph Skehan, sisters Mary Watson and Sister Teresa Skehan. He is survived by son Jim and wife Laura of Ozona and daughter Mary and husband Sam Fritz of Comstock, a sister, Marie Cooney, of Wareham MA and Father James Skehan, S.J. of Boston MA, and numerous nieces and nephews. Grandchildren include Kristin and Galen Schwartz, Bryan and Paige Skehan, Allison and Garret Kleman, and Houston Dobbins. Great-grandchildren include Emy and Sterling Schwartz, Stanton and Allie Skehan, and Blakely, Brooklyn, Claire, and Kye Kleman. Pallbearers will be Houston Dobbins, Garrett Kleman, Galen Schwartz, Bryan Skehan, Mike Cox, Alton Everett, and Britt Mynatt. Honorary pallbearers will be Jack Skiles, Tim McReynolds, Robert Hidalgo, Bill Babb, and John McFadin. Visitations will be held on Sunday, December 15, 2019 at G. W. Cox Memorial Funeral Home from 5:00 p.m. – 7:30 p.m. with a Holy Rosary at 6:30 p.m. A Mass of Christian Burial will be held on Monday, December 16, 2019 at Sacred Heart Catholic Church at 10:00 a.m. with his nephew Father Mathew Zuberbueler as the officiant. Interment will follow to Sacred Heart Catholic Cemetery. Funeral arrangements are under the care and direction of G.W. Cox Memorial Funeral Home, 114 Fletcher Drive, Del Rio, Texas. For More information you may contact us at (830)775-2000 or www.gwcoxmemorialfuneralhome.com

The family of Francis A. "Hank" Skehan created this Life Tributes page to make it easy to share your memories.