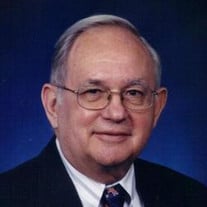 Judge George Murat Thurmond passed away on the morning of May 7, 2017. A lifelong resident of Del Rio, he was born on Oct. 22, 1930, to Roger H. Thurmond and Day (Hamilton) Thurmond. His younger brother, Roger “Mickey” Thurmond preceded him in death in 2011. After graduating from Del Rio High School in 1948, George attended the University of the South in Sewanee, Tennessee, with his childhood friend John Radney Foster. He received his JD in 1955 from the University of Texas, where during his senior year, he was an associate note editor at the Texas Law Review. He was also a member of the fraternal order Phi Gamma Delta. Johnny, his roommate at law school, once described him as being “real studious, and a fun guy to be around.” During George’s final year of law school he followed in the footsteps of his father and grandfather, for whom he was named after, and served two terms in the Texas State House of Representatives from 1955 to 1958. While in office, he was a member of the Criminal Jurisprudence and Judiciary committees, among several others. The same year he began his service in the legislature, he started working as an associate at a law firm in Del Rio. He would become a partner at Montague & Thurmond with former district judge Brian Montague. Starting in 1965, he served three years on the Board of Directors of the State Bar Association, becoming one of its youngest members. In 1970, at age 39, he announced his intention to run for the office of district judge of the 63rd Judicial District, which served Val Verde, Edwards, Kinney, Maverick and Terrell counties. He would be filling the seat left vacant by the death of his father, who had held the office since 1946. George won the seat with 70.2 percent of the vote. In a political advertisement, George stated: “To have effective law enforcement, it is essential that a judge be possessed of a reputation for honesty, integrity and dignity.” He would maintain this standard throughout his career. During his esteemed 30-year tenure, he presided over criminal, civil, and domestic cases, with his favorite cases involving the adoption of children to good homes. He was also very active with the Juvenile Welfare Board. In describing his role as judge, he once said, “You can't play a baseball game without an umpire or a football game without a referee. But on the other hand, you're not there just to call the balls and strikes. You have to keep litigation moving. … You have to keep your eyes open and strive to see that lawyers do the job that they're supposed to do in representing their clients ethically and to the best of their legal ability without stepping out of bounds.” Well respected by lawyers and judges statewide, he was appointed Presiding Judge of the 6th Administrative Region from 1983 to 1987 and elected by his peers as Chairman of the Judicial Section of the State Bar of Texas, serving from 1988 through 1989. Although he retired as district judge in 2000, he continued to serve as a Senior Judge and presided over cases around the state. Growing up in Del Rio, George enjoyed hunting at his family’s ranch in Kinney County and performing “feats of magic” at the Rotary, Lions and other clubs around town with his assistant Jimmy Sanders, the owner of the now-closed Emporium on Main Street. A popular student, George was elected “mayor for a day” in 1948 when his high school civics class was allowed to take over the city for the day. Later in life, he would become an avid scuba diver and enjoyed attending the annual jazz festival in Sacramento, California. On March 22, George suffered a stroke, from which he never fully recovered. He is survived by his wife of 57 years, Elsiejean “Jeanie” (Davis) Thurmond; his daughters, Carolyn Day Thurmond, an assistant district attorney in Midland; Georganna Gomillion, a middle school counselor in Lockhart; and Sarah Gail Thurmond, a magazine editor in Austin; his son-in-law Frank Gomillion, an architect in Lockhart and San Marcos; and his granddaughters Lilly Quinn Gomillion and Lilah Day Gomillion. The family wishes to thank the staff at La Vida Serena in Del Rio for the care they gave George during his final days. Visitations will be held on Wednesday, 5-9:00P.M, May 10, 2017 at G. W. Cox Memorial Funeral Home. Funeral service will be held on Thursday, 11:00A.M, May 11, 2017 at St. James Episcopal Church where he was a lifelong member, followed with interment at Westlawn Cemetery. In Lieu of usual remembrances donations may be made to St. James Episcopal School, P.O Box 4000, Del Rio, Texas 78841. Funeral arrangements with G. W. Cox Memorial Funeral Home, of Del Rio LTD, 114 Fletcher Drive, Del Rio, Texas. 78840 Ph: 830.775.2000

Judge George Murat Thurmond passed away on the morning of May 7, 2017. A lifelong resident of Del Rio, he was born on Oct. 22, 1930, to Roger H. Thurmond and Day (Hamilton) Thurmond. His younger brother, Roger &#8220;Mickey&#8221; Thurmond preceded... View Obituary & Service Information

The family of George Murat Thurmond created this Life Tributes page to make it easy to share your memories.

Judge George Murat Thurmond passed away on the morning of May...

Send flowers to the Thurmond family.