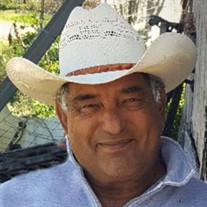 Gomesindo A. Falcon entered into rest on January 6, 2020 in Del Rio. He was born on January 13, 1941, in Campwood TX. Gome was preceded in death by his wife, Gloria Castillo Falcon, his parents, Genovevo and Carolina Falcon, and his brother Israel Falcon. Left to cherish is memory are his four children, Gomesindo Jr., Mary Ann (Robert) Ruiz, Ariel and Alfredo (Rose) Falcon. Grandchildren, Priscilla Elaine (Procopio) Garcia, Gomesindo III (Candy), Ryan, Justin, Gloria Dariela, Adrian, Troy Falcon, Robby (Klarissa) Ruiz, David (Kelly) Ruiz, Stephanie (Allen) Schlesinger, Ariel Lee (Lupita), Joshua, Christopher (Desiree), Alfredo Jr. (Diana), Eric (Keisha), and Vicente Falcon. Great grandchildren, Kaiden Michael, Xander, Juliana, Abigail, Michael, Madison, Montserra, Ary, Noah, Jacob, Jayden, Michaela, Adam, Caleb, Aubree, Esequiel, Rebecca, Kameron, Alfredo III, Kaiden, Ava Grace. He is also survived by his brother Keno Falcon. Gome was 20 years old when he met his wife, Gloria, the love of his life. They were married for 50 years until her passing. They had four children and then the family kept growing with 16 grandchildren and 22 great grandchildren. He made each grandchild feel special and loved. Everyone enjoyed listening to his life stories and especially his jokes. We often wondered how he came up with them so quickly. He was a hard worker and instilled this trait in his family. He began to work at the tender age of 6 picking up wool and eventually sheep shearing. He ran his own crew with the help of our mother for many years. He was well known with the local ranchers as he sheared for them at some point in his life. He loved the outdoors and he loved his horse making sure it was fed even before he had breakfast. Visitation will be held on Wednesday, January 8, 2020, from 5:00 pm – 9:00 pm. Recitation of the Holy Rosary at 7:00 pm. A mass of Christian Burial will be held on Thursday, January 9, 2020, at 12 noon at Our Lady of Guadalupe Church. Interment will follow at Sunset Memorial Oaks Cemetery. Those with the honor of pallbearers are his grandsons: Robby, David, Gomesindo III “Bubba”, Ryan, Joshua, Ariel Lee, Christopher, Alfredo Jr., and Justin. Special thanks for their services to La Vida Serena, Dr. Gutierrez, and Dr. Wu. Funeral arrangements are under care and direction of G.W. Cox Memorial Funeral Home, 114 Fletcher Drive, Del Rio, Texas. For more information you may contact us at (830)775-2000 or www.gwcoxmemorialfuneralhome.com

Gomesindo A. Falcon entered into rest on January 6, 2020 in Del Rio. He was born on January 13, 1941, in Campwood TX. Gome was preceded in death by his wife, Gloria Castillo Falcon, his parents, Genovevo and Carolina Falcon, and his brother... View Obituary & Service Information

The family of Gomesindo A. Falcon created this Life Tributes page to make it easy to share your memories.

Send flowers to the Falcon family.