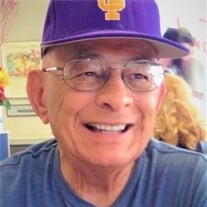 Guadalupe “Lupe” DeHoyos, age 82, lovingly known as “Coach, Mr. D” went to be with the Lord on Thursday, August 22, 2019; he was surrounded by family and passed peacefully in the comfort of his own home. Lupe was a native Del Rioan with a passion for his hometown, especially for his querido barrio de San Felipe. Lupe was born on March 18, 1937 to Ramon and Maria C. DeHoyos. Lupe attended San Felipe high school where he earned a track and baseball scholarship to Texas A&M University and was also a member of the Corps of Cadets. Later Lupe then transferred and graduated from Sul Ross State University in Alpine, TX where he too ran track and played baseball. Upon graduation Lupe devoted his life to the city of Del Rio as the City Recreation Director, coach, biology teacher, SFDRCISD Athletic Director and school board member. As the Recreation Director he created and brought many programs that we all know of today, softball slow pitch league at Hogan park as well as the summer recreation program, to name a few. Lupe took pride as he was the only individual that had the honor to coach at Del Rio’s three schools: San Felipe Mustangs, Del Rio Wildcats and SFDRCISD Rams. He was a member of many organizations, American GI Forum and San Felipe Exes to name a few. It was his active participation with the American GI Forum where he met wife Jessie Flores of El Paso, Texas in 1976 and later married in 1978. Lupe never met a stranger, his smile, his compassion, big heart and love for others will be greatly missed. The last year of life was a challenging one for him. He wasn’t his strong and healthy self and unfortunately his body started to fail him. However, Lupe did not ever lose hope, he was optimistic and fought hard to the very end. Support, words of encouragement and prayers from family and friends helped him get through his last tough year of life. A special thank you to Alma Rodriguez and Josie Contreras for caring for our dad with love and respect to the very end. His passing will leave a void in our hearts and will be greatly missed. The barrio of San Felipe and the city of Del Rio lost a little piece of history with his death, and the lights of his beloved hometown got a little dimmer. I have fought the good fight to the end; I have run the race to the finish; I have kept the faith. (2 Timothy 4:7) Lupe is survived by his wife of 40 years, Jessie; children: Adam & Laura Guzman of San Antonio, TX; Jessica & Brody Flanagin of Dallas, TX and Ramon Luis of Houston, TX, four grandchildren: Aeneas & Marco Guzman and Luke and Stella Flanagin. Siblings: Sylvia & Donald Cullum of San Antonio, TX; Ramon & Herlinda of San Antonio,TX; Linda & Manuel Polanco of Del Rio, TX; Sobeida & John Butchko of Costa Mesa, CA; Rosemary & Marshall Wallace of New Braunfels, TX; in addition to many nieces, nephews and friends. Lupe is preceded in death by his parents, Ramon and Maria C. DeHoyos and his siblings Pedro DeHoyos, Rachel Draeger and many dear friends. The DeHoyos family will receive friends on Sunday, August 25, 2019 from 4:00 – 6:00 p.m. at Sacred Heart Catholic Church. A Mass of Christian Burial will be held on Monday, August 26, 2019 at 10:30 a.m. at Sacred Heart Catholic Church. Funeral arrangements are under the care and direction of G.W. Cox Memorial Funeral Home, 114 Fletcher Drive, Del Rio, Texas. For more information you may contact us at (830) 775-2000 or www.gwcoxmemorialfuneralhome.com.

The family of Guadalupe De Hoyos created this Life Tributes page to make it easy to share your memories.