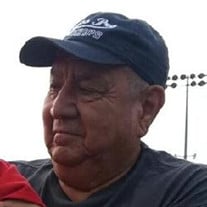 Guillermo (Memo) Sanchez Jr., went to our loving Lord on June 11, 2017 at St. Luke’s Hospital in San Antonio, Texas. Memo was preceded in death by his parents Macaria and Guillermo Sanchez. Memo is survived by his beloved wife of 46 years: Juanita Sanchez; son: Guillermo Sanchez III (Elizabeth); granddaughter: Maria Dolores; sisters: Mary Sanchez, Leticia Sanchez. Lisa Salinas; brother: Richard Sanchez (Mary); special cousin: Dahy Araujo (Beto); brothers-law, Lupe Rodriguez (Maria E.), Ruben Rodriguez (Sandra), sister-in-law, Estela Rodriguez and Lucy Barrientos (Alfredo), and many nieces, nephews and cousins. Memo lived his life faithfully devoted to his family. He enjoyed spending time with his family and friends, but it was in the last ten years of his life that he found the most joy in spending time with his granddaughter, Maria. “Grandpa” was the proudest title he held. Grandpa’s eyes sparkled, like nothing else, at the site of his “chulita”, as he affectionately called her. He was so proud of every milestone that she achieved. He was so patient as she used him as a canvas while playing with stickers and markers. Simply put, Grandpa’s life revolved around his precious Maria. We thank you God for allowing us to have Memo in our lives and for the memories that we cherish. We will miss him dearly. Psalm 136:1 Den gracias al Senor, porque el es bueno, porque su amor perdura para siempre! Memos family would like to thank Father Kennedy, and the staff at St. Luke’s Hospital for their compassionate care given to Memo. Funeral arrangements were made according to Memo’s wishes. Visitations will be on Thursday, 11A.M.-1:00P.M, June 15, 2017 at G. W. Cox Memorial Funeral Home. Graveside service will follow at San Felipe Cemetery Thursday, 1:30 P.M, June 15, 2017. Funeral arrangements with G. W. Cox Memorial Funeral Home, of Del Rio LTD, 114 Fletcher Drive, Del Rio, Texas. 78840 Ph: 830.775.2000

Guillermo (Memo) Sanchez Jr., went to our loving Lord on June 11, 2017 at St. Luke&#8217;s Hospital in San Antonio, Texas. Memo was preceded in death by his parents Macaria and Guillermo Sanchez. Memo is survived by his beloved wife of 46 years:... View Obituary & Service Information

The family of Guillermo "Memo" Sanchez created this Life Tributes page to make it easy to share your memories.

Send flowers to the Sanchez family.