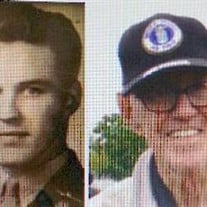 Harold Eugene Reed Sr., 90, of Del Rio, TX, was called to be with the Lord as the sun set on his life January 18, 2015 in San Antonio, TX. With his family at his side, Harold had a short but spirited battle with pneumonia. The sunrise of Mr. Reed's life was September 7, 1924 in Davidson County near Nashville, TN with parents James Polk and Maude McDowell Reed, the youngest of 6 children. He completed his education at the Tennessee Prep School and joined the U.S. Army in January 1943, serving in the Army Air Corps, the Army Air Forces, and eventually the U.S. Air Force. Harold served our great nation for more than 21 years taking part in the rebuilding of Japan following WWII and was a member of the infamous USAF U-2 unit when it discovered nuclear capable missiles in Cuba in the early 1960's. His tours of duty included Georgia, California, Florida, Mississippi, Montana, Japan, England, and finally right here in Del Rio at Laughlin AFB. After leaving active duty, Harold settled in Del Rio for the remainder of his life raising 4 children here and submersing himself into local business, politics, and service to the community. He and his wife Connie operated a business on Margarita St. (now known as Dr. Fermin Calderon Blvd) for many years, he was a trustee on the School Board, a one of the founders of the Boys and Girls Club, a member of the GI Forum and American Legion, elected Justice of the Peace, and he concluded his service to the community as the Val Verde County Health Inspector. Harold loved life and made the best of it. He had some wonderful experiences during his life and loved to share them with people he met. He was a people person and never met a person he did not like He greeted with a smile, a joke, words of wisdom, and perhaps a peppermint candy. Harold believed in our savior Jesus Christ and you could always count on him to help someone in need. His favorite bible verse was John 3:16: "For God so loved the world that he gave His only begotten son that whosoever believeth in Him should not perish but have everlasting life." Mr. Reed is survived by his daughters Elizabeth Evert and Katherine Smith; sons Harold Reed Jr. and Anthony Reed; 8 grandchildren, Jerauld III, Alexandria, Amy, April, Toni, Brandi, Austin, and Dallas; and 1 great grandchild, baby Emma. He was preceded in death by his wife Connie Reed; sister, Frances Alexander; brothers, Haskell Padgett, James Reed Jr., Edward Reed, and Douglas Reed. Visitations will be held on Thursday, 6-9:00P.M, January 22, 2015 at G. W. Cox Memorial Funeral Home. Graveside service will be Friday, 10:00A.M, January 23, 2015 at Sunset Memorial Oaks Cemetery. Funeral arrangements with G. W. Cox Memorial Funeral Home, of Del Rio LTD, 114 Fletcher Drive, Del Rio, Texas. 78840 Ph: 830.775.2000

Harold Eugene Reed Sr., 90, of Del Rio, TX, was called to be with the Lord as the sun set on his life January 18, 2015 in San Antonio, TX. With his family at his side, Harold had a short but spirited battle with pneumonia. The sunrise of Mr.... View Obituary & Service Information

The family of Harold Eugene Reed created this Life Tributes page to make it easy to share your memories.

Send flowers to the Reed family.