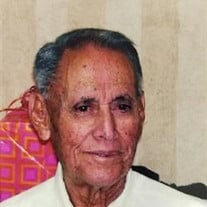 Hector “Tito” Valdés, 86, passed away at his home on November 30, 2016 after a brief illness. He was preceded in death by his beloved father and mother, Hervey and Hortencia C. Valdez, and his sister, Hilda Valdez Aguirre. Those who knew Tito, know how much he enjoyed playing golf and of his passion for cars. He was a member of the San Felipe Country Club, founder of the Marfa Lion’s Club and served on the Del Rio Chamber of Commerce Red Carpet Committee. Growing up, he was a member of El Principe de Paz United Methodist Church. A veteran educator of 36 years, he served as a teacher, coach and administrator. He graduated from San Felipe High School, Class of 1949, and he went on to earn a Bachelor’s degree and a Master’s degree from Sul Ross State University in Alpine, Texas. Hector married Yolanda Mendoza, of Marfa, Texas on April 5, 1953 and moved to Marfa. He began his education career in Marfa in 1953 where he was a teacher and coach at Blackwell School. Hector was an avid supporter of Blackwell School and The Blackwell School Alliance. After leaving Marfa, he returned to Del Rio, his hometown. He continued his education career with the San Felipe ISD and the San Felipe Del Rio Consolidated ISD where he served as a teacher and administrator. During this time, Tito owned an insurance agency and a gasoline station. Hector later married Diana Ramirez on December 11, 1970, and they remained in Del Rio. He retired from the public schools in 1989, and went on to work in sales. He was quite the salesman having sold cars, carports, clothing and vitamins/supplements to name a few. Hector is survived by his wife of 45 years, Diana R. Valdés; his children, Rocky Valdés (Diana), Melva Valdés Cárdenas, Michael Valdés (Laura), Eddie Valdés; grandchildren, Rocky Valdés (Salena), René Cárdenas (Karla Vargas), Elisa Valdés Jankly (Chris), Javi Valdés, Isaiah Valdés, Elias Valdés; great-grandchildren, Bethany Jankly and Bettina Jankly; brother-in-law, Humberto Aguirre; nieces, nephews and numerous cousins; and devoted caregiver, Teresa Pérez. Pallbearers are Rocky Valdés, René Cárdenas, Javi Valdés, Isaiah Valdés, Elias Valdés and Chris Jankly. In lieu of usual remembrances, donations may be made in his honor to the San Felipe Exes, Del Rio, Texas 78840 or The Blackwell School Alliance, P.O. Box 417, Marfa, Texas 79843. Visitation is scheduled Friday, December 2, 2016, 6:00-9:00 PM at G. W. Cox Memorial Funeral Home. A Chapel Service will be held on Saturday, December 3, 2016, 11:00 AM, also at G. W. Cox Memorial Funeral Home followed by interment at Sunset Memorial Oaks Cemetery. Funeral arrangements with G. W. Cox Memorial Funeral Home, of Del Rio LTD, 114 Fletcher Drive, Del Rio, Texas. 78840 Ph: 830.775.2000

Hector &#8220;Tito&#8221; Valdés, 86, passed away at his home on November 30, 2016 after a brief illness. He was preceded in death by his beloved father and mother, Hervey and Hortencia C. Valdez, and his sister, Hilda Valdez Aguirre. Those... View Obituary & Service Information

The family of Hector Tito Valdes created this Life Tributes page to make it easy to share your memories.

Send flowers to the Valdes family.