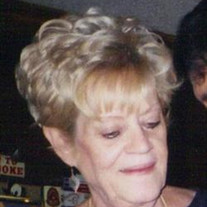 Helen (Betty) Campbell-Basse passed away peacefully surrounded by family after a brief battle with cancer April 21, 2016 in San Antonio, TX. Helen (Betty) Campbell-Basse was born on January 23, 1941 to Clyde and Helen Campbell in San Antonio, TX. She is preceded in death by her husband, Florent A Basse, Jr., parents Clyde and Helen Campbell; sister: Susan Doherty and brother: Daniel Swayze. She lived life to the fullest; she enjoyed cooking and entertaining friends and family. She is survived by her daughter: Tina Johnson, husband Dwayne: sister: Patsy Campbell; Step Daughter Elaine Lemp and husband Kurt, Step Son Scott Basse and wife Donna, Grandchildren Justin, Kayla and Ryan Walterbach, Zachary Lemp, and Dillon Basse. She was an active member of the Elks Lodge in Del Rio, Texas. Betty was a avid and loyal Elk Member for 15years and an officer of the Lodge as a Trustee for 4 years. She was extremely generous member giving to the Lodge to make it the “Extra Special” for all its members. Loving, caring and devoted are only a very few words to describe Betty. She will be sorely missed by all who knew her and loved her. Honorary Pallbearers are Zachary Lemp, Justin Walterbach, Dillon Basse and Ryan Walterbach. In Lieu of usual remembrances, please make donations to the Elks Lodge of Del Rio, Texas. Graveside services will be held on Saturday, April 30, 2016 at 11:00A.M at Westlawn Cemetery. Funeral arrangements with G. W. Cox Memorial Funeral Home, of Del Rio LTD, 114 Fletcher Drive, Del Rio, Texas. 78840 Ph: 830.775.2000

The family of Helen (Betty) Campbell Basse created this Life Tributes page to make it easy to share your memories.