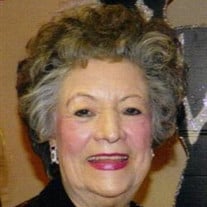 A woman of faith, she lived her life to honor God and her family.. .and did so with grace and love. The Lord said, "Come home," and she answered the call. Hilda Valdez Aguirre, 80, a Del Rio native, died at her home in Del Rio on June 14, 2014. She was preceded in death by her beloved mother and father, Hortencia C. and Hervey Valdez and her great-grandson, Max Fitzpatrick. A woman of beauty and elegance, Hilda had a strong sense of family and home, and a love of community and country. She was a civic minded woman of kindness and compassion, and participated in numerous community and church organizations. Hilda was an active member of First United Methodist Church, where she enjoyed singing in the choir. She was also a proud graduate of the San Felipe High School Class of 1951 where through the years she continued to revel in the pride and camaraderie of the spirit of the San Felipe Mustangs. Hilda relished the arts, concerts, music, and enjoyed entertaining family and friends in her home. She was strong and independent, and a born leader. Her early business education after high school and her natural creative flair led her to a second career after raising her family as a devoted mother. Together with her daughters, Belinda and Lori, she opened, owned, and operated the family business for 37 years—As Always.. .Simply Beautiful Flowers. Having a strong work ethic which she passed along to her children, even as her health declined, she continued to go to the flower shop to "supervise" and visit with her many loyal customers and friends. A loving wife, mother, grandmother, great-grandmother, sister, aunt, cousin, and friend, she will be greatly missed by all who had the privilege of knowing and loving her. Hilda's greatest accomplishment was her family. She taught, she lived, she loved.. .and she leaves us with celebratory spirits and beautiful memories that will forever remain in our hearts. Hilda is survived by the love of her life, her husband of 61 years, Humberto Aguirre; her beloved children, Belinda Aguirre, Landa Aguirre, Lori A. Tackett and Wally Aguirre (Helena); son-in-law Jeff Tackett; grandchildren, Summerlynn Fitzpatrick (Sean Michael); Brittney Tackett; and great-grandson Sean Riley Fitzpatrick; brother, Hector Valdes (Diana); numerous nieces and nephews; and Tina Munoz, beloved employee of many years. Pallbearers are Rocky Valdes, Eddie Valdes, Michael Valdes, Lionel Aguirre, Roland Aguirre, and Ruben Aguirre. Honorary pallbearers are Richard Bragg and Paul Bayoff. Sharing of memories and visitation will be held on June 16, 2014 from 6-9:00P.M, at G.W. Cox Memorial Funeral Home Chapel. A celebration of her life will be held June 17, 2014 at 10:00A.M, First United Methodist Church, 100 Spring Street, Del Rio, TX. Entombment will follow at Sunset Memorial Oaks Cemetery. Funeral arrangements with G. W. Cox Memorial Funeral Home, of Del Rio LTD, 114 Fletcher Drive, Del Rio, Texas. 78840 Ph: 830.775.2000

A woman of faith, she lived her life to honor God and her family.. .and did so with grace and love. The Lord said, "Come home," and she answered the call. Hilda Valdez Aguirre, 80, a Del Rio native, died at her home in Del Rio on June 14, 2014.... View Obituary & Service Information

The family of Hilda Valdez Aguirre created this Life Tributes page to make it easy to share your memories.

A woman of faith, she lived her life to honor God and her family.....

Send flowers to the Aguirre family.