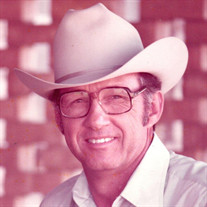 Howard was born in Dilley, Texas, and moved to Uvalde his freshman year of high school where he met and married the love of his life, Joanne Evans. He was a natural athlete and received a football scholarship to attend college in Abilene. After college he and Joanne moved back to Uvalde to farm and ranch. His family was a priority and any time he was needed, he was there before help was even asked for. The BEST Dad, Grandfather and friend—always patient and hands-on. He had a gift of making people around him feel so important, special and loved beyond measure. He was adored by his children, grandchildren, great-grandchildren and so many more. Howard was always involved with the Baptist Church, teaching Sunday School, leading the singing, and in whatever way he could serve. His generosity went out to anyone in need, including strangers. Howard was always willing to mentor young people through hard work and fellowship throughout the years. One of his favorite pass times was telling stories. Along Howard’s life path, he had many adventurous business endeavors which included: farming, ranching, flying and other out-of-the country ventures. He was young at heart and enjoyed life to the fullest. Loved ones who preceded him in death include his parents, Carvel Eugene and Henry Ella Key Collins, his wife Joanne Evans Collins, his brothers Willie Davis, Carvel Key, Jack Forbes, Nuel Joe, his grandson P.C. Taylor and son-in-law Jake Hale. He is survived by his 4 daughters, Marjorie Lynne Collins—husband Bill Kessler, Judy Hale, MaryLee Taylor, and Jeanne Ann Collins. Grandchildren: Heidi, Joanne, Valerie, Jaime, and Randa. Great-grandchildren: Garet, Matthew, Ally, Makayla, Key and Kynlee. And numerous nieces and nephews. We thank the devoted staff and caregivers that gave loving care at Southwest Assisted Living in Del Rio. Honorary Pall Bearers: Ronnie Collins, Corky Collins, Jon David Key, Chevy Collins, Happy Schawe, Fritz Coleman, Don Freitag, Rod Rodriguez, Jr., Elizabeth Williams, Mark Williams, Jason Mellinger, Bill Kessler, Lou Fohn, and Wade Coleman. In lieu of flowers, the family asks that you give to your favorite charity. Due to the pandemic going on and the need for social distancing the services have been canceled. For more information you may contact G.W. Cox Memorial Funeral Home at 830.775.2000 or www.gwcoxmemorialfuneralhome.com.

Howard was born in Dilley, Texas, and moved to Uvalde his freshman year of high school where he met and married the love of his life, Joanne Evans. He was a natural athlete and received a football scholarship to attend college in Abilene. After... View Obituary & Service Information

The family of Howard Lynn Collins created this Life Tributes page to make it easy to share your memories.

Howard was born in Dilley, Texas, and moved to Uvalde his freshman...

Send flowers to the Collins family.