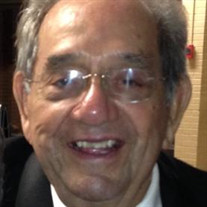 Humberto Aguirre, 86, of Del Rio, peacefully passed away on September 7, 2018. He now joins his Heavenly Father and wife of 61 years whom he deeply missed, Hilda Valdez Aguirre. Also preceding him in death are his father, Fermin Aguirre Sr, mother, Carolina Aguirre, brothers Fermin Aguirre Jr and Lionel Aguirre, brother and sister-in-law Simon and Maruca Aguirre, and sisters and brothers-in law, Amalia and Silvestre Renovato and Clara and Johnnie Calderon; brother-in-law Hector Valdes and great grandson, Max Fitzpatrick. Humberto had a great sense of patriotism for his country and local community. He was a defender of human rights, a fighter of the less fortunate, and a political advocate for equality. He enjoyed sports and playing golf, spending time with family, and chatting up anyone who would lend him an ear. At federal and state levels, Humberto was instrumental in developing and assisting in funding education, economic, and recreation programs through his career with the Office of Economic Opportunity, Texas Education Agency, and the Governor's Office of Migrant Affairs. As an educator for many years, he served as Vice President of St. Edward's University in Austin, TX as well as various positions for U.S. Senator John Tower and Texas Governor Preston Smith. However, his greatest professional passion was providing assistance through these offices to the community where he was raised and that he loved so dearly. A veteran himself of the United States Air Force, Humberto was an advocate for veterans and their families. He was one of the original founders of the Del Rio Chapter of the American G. I. Forum and served as State Chairman. He also served on the Military Affairs Association at LAFB and the Board of Directors of the Laughlin Heritage Foundation Museum. San Felipe High School, where he was a member of the State Regional Champion Football Team of 1948 and named by the district as "All Iron Man" was dear to Humberto's heart. He enjoyed reminiscing with friends about the good 'ole days. He was also an active member of the First United Methodist Church and sang in the church choir. After his retirement he would enjoy bringing smiles to people's faces by delivering flowers for the family owned business, As Always Simply Beautiful. His pride and joy, of which he boasted at any opportunity given, were his grandchildren and great grandchildren. To the amazement of all those who knew otherwise, he would jokingly say that they looked just like him. Humberto is survived by his beloved children, Belinda Aguirre, Landa Aguirre, Lori Tackett , Waldo Aguirre, and son-in-law Jeff Tackett; grandchildren, Summerlynn Fitzpatrick (Sean Michael), Brittney Tackett, and great grandchildren Sean Riley Fitzpatrick, James Michael Fitzpatrick, and Sophia Grace Fitzpatrick; sisters-in-law Diana Valdes and Esperanza (Nena) Aguirre; numerous nieces and nephews. Full Military honors will be rendered by the American Legion Post #595 Honor Guards and the United Sates Airforce.

Humberto Aguirre, 86, of Del Rio, peacefully passed away on September 7, 2018. He now joins his Heavenly Father and wife of 61 years whom he deeply missed, Hilda Valdez Aguirre. Also preceding him in death are his father, Fermin Aguirre Sr,... View Obituary & Service Information

The family of Humberto Aguirre created this Life Tributes page to make it easy to share your memories.

Humberto Aguirre, 86, of Del Rio, peacefully passed away on September...

Send flowers to the Aguirre family.