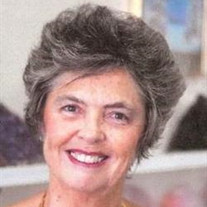 Ivanne Estelle Farr, 74, went home to be with her Lord and Savior Jesus Christ on December 3, 2014 in Del Rio, Texas. After a valiant battle with a long illness, she went home to be with her true Father in heaven in the most peaceful way. Ivanne was born on February 7, 1940 in Texarkana, Arkansas to the late F. Lynnwood and Leone Seedig Farr. She graduated from Texarkana High School in 1957 and attended Southwest Texas State University. After marrying, she raised her 3 children in Corpus Christi, Texas. Ivanne merged her love of the earth’s natural treasures, her God-given talent of artistry and inherited entrepreneurship, and founded her jewelry studio, Ivanne Et Cie, Inc. in Corpus Christi in 1976. She designed one-of-a-kind jewelry pieces for clients throughout south Texas and all over the world. In 1990, Ivanne joined her parents, relocating to the family ranch in Meridian, Texas where she continued her involvement in community organizations, serving on the Bosque County Tourism Council and Texas Chisholm Trail Association. Despite being a “Texan through and through,” she followed her heart’s desire to live near the sea and moved to the beautiful Caribbean island of St. Thomas, USVI in 2003. In 2006, she established the Caribbean Islands Education Foundation, a not-for-profit. She created the Rare Earth Studio which offers courses in gemology, design and jewelry workshops. Her “crowning jewel” of her organization is Pure Caribbean. This program was designed for local individuals to embrace creativity, exclusively produced in the Caribbean Islands. Ivanne had a heart of service for her God. She participated in numerous service and civic organizations in Corpus Christi to include Junior League, Good Shepherd Episcopal Church, and the Corpus Christi Charity League. She carried God’s service to the islands, striving to make her beloved Virgin Islands a better place for all. As a member of the Nazareth By the Sea Episcopal Church, she served on the Bishop’s committee and health ministries. She was founding secretary/treasurer for Daughters of the King Assembly, USVI, Vice-president of the USVI YWCA and Founding Charter President for the VI Alumni Chapter of GIA. As a lifelong teacher, Ivanne donated her time to the Virgin Islands Environmental Resource Station (VIERS), working to instill the love and respect for earth’s treasures. Ivanne was known to all as a mentor, friend, visionary and beautiful soul, full of love and grace with boundless creativity, courage and patience. Known to her grandchildren or “Grands” as YaYa and Granne, she was a statue of positivity, bold and courageous. “Like the precious stones and jewelry that surrounded her life in the Virgin Islands, Ivanne was a pure Joy, a Gem, a rare cut priceless stone, loving, kind, woman of faith; A trailblazer, entrepreneur and free-spirit who wanted the best for all.” Ivanne is preceded in death by her parents, F. Lynnwood Farr and Leone Seedig Farr; her brothers, Stan Farr and Paul Farr and oldest son, Joe Farr Alsup. She is survived by son Mark Alsup and wife Stephanie of Del Rio, Tx; daughter LeAnne Romo and husband Louis Romo of Cypress, Tx. Her “Grands” and eternal source of pride are Kendall, Parker and Campbell Alsup of Del Rio and Rudder and Kennedy Romo of Cypress. She is also survived by a sister, Lynda Arnold of Ft. Worth, Tx and a brother, Lynn Farr, Jr. of Switzerland, as well as many nieces and nephews. A celebration of her life will be held at St. James Episcopal Church on Saturday, December 6th at 2pm. In lieu of flowers, you may honor Ivanne’s love of the islands and its resources by making a donation to the VIERS Camp in St. John. www.VIERS.org. Funeral arrangements with G. W. Cox Memorial Funeral Home, of Del Rio LTD, 114 Fletcher Drive, Del Rio, Texas. 78840 Ph: 830.775.2000

The family of Ivanne Estelle Farr created this Life Tributes page to make it easy to share your memories.

Ivanne Estelle Farr, 74, went home to be with her Lord and Savior...

Send flowers to the Farr family.