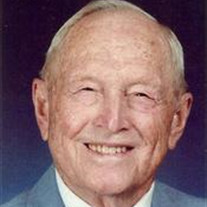 James Addison Blocklinger, born in Healdton, Oklahoma to W. T. and Ethel Blocklinger on July 21, 1921, passed into peace on Wednesday, November 28, 2012, in San Antonio, Texas surrounded by his family. He lived a long and full life of ninety-one years. Jim said he came to Texas as quickly as he could, attending grade school and graduating from McAllen High School. He met his beloved bride, Helen Parish, as a young boy in McAllen. His career life reads like a novel. He joined the Navy before World War II and survived the attack on Pearl Harbor. He fought the war in the Pacific. On the last day of the war a Kamikaze struck his ship causing fire, massive destruction and death. Due to his heroism, the Navy offered Jim a commission but he decided to return to Texas to marry Helen and begin their life of sixty-six years together. After many successful endeavors following World War II, Jim joined the U.S. Border Patrol. During the Korean War the Navy called him back to put ships into commission. He then returned to the U.S. Patrol and retired in Del Rio in 1977. He worked on both the southern and northern borders of the country with honesty and integrity. Jim Blocklinger not only served his country but also his community which has been Del Rio since 1964. His dedicated work through the Lion’s Club and Masons benefitted many people. He best loved being with his family, Helen and their two daughters Judith and Jilda. Next, he loved being in nature whether it was on land or water. He loved animals. He thrived on history and archeology. He guided many a university professor and aided them in identifying American Indian artifacts. He felt most happy in the kitchen at home but throughout his life he cooked for and fed untold thousands of people. Fewer things gave him more pleasure. Jim Blocklinger never met a stranger. He sang opera. He loved classical music and poetry. He wrote. He built things. He danced. And he whistled his tunes out of the corner of his mouth. His spirit remains in the hearts of his wife Helen, his two daughters and his many nieces and nephews. In addition, all those whose lives he touched with his smile will remember him as well. A Memorial service to celebrate his life will be held on Friday, 11:00A.M, December 7, 2012 at the First United Methodist Church in Del Rio, Texas. In Lieu of Usual Remembrances the family requests donations be made to the Cripple Children Charities or any Animal Humane Societies or charity of choice.

James Addison Blocklinger, born in Healdton, Oklahoma to W. T. and Ethel Blocklinger on July 21, 1921, passed into peace on Wednesday, November 28, 2012, in San Antonio, Texas surrounded by his family. He lived a long and full life of ninety-one... View Obituary & Service Information

The family of James Addison Blocklinger created this Life Tributes page to make it easy to share your memories.

Send flowers to the Blocklinger family.