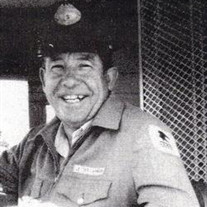 James Volney Roberts, Jr. (Junior) passed away October 29th, 2016 at Metropolitan Methodist Hospital in San Antonio, Texas. He was born October 3rd, 1925 in the Sonora, Texas. He is survived by his loving wife Mary; cousin Beverly Taylor, special cousin Sue Black, niece Linda Gail Roberts Cook of Oregon, and Glenda White of Brady Texas, and adopted nieces Fonda, husband Charles E Downs, and family, and Wanda, husband Stan Macklin, and family. He is preceded in death by his parents, James Volney Roberts Sr. and Lillian Henderson Roberts, and his six Siblings: Duard Monroe (Bub), Scott Henderson, Cloma Allan, Elmo Dunbard, Bessie Wadell and Billie Jean Flemister, and great nephew Travis Tweed Downs. His passing is deeply mourned by family and many many long-time friends. Junior joined the Marines December 19th, 1943 at the age of eighteen and served in World War II South Pacific (Japan). He returned to work with the International Boundary Commission for a short period before seeking adventure and work in Alaska as a heavy equipment operator. When he returned to the lower US, he saw a high school picture of his "future" wife and even though he had never met her, he told his life-long friend Norbert Mclntyre, 'That's the girl I'm going to marry." June 7th, 1953, he married the girl in the picture, Mary Lilly Turman of Sonora Texas, and they moved into their new home in Del Rio in 1954. He always referred to Mary, even after 63 years, as his bride. He again returned to work for the Boundary Commission for a short time, the flight line at Laughlin AFB, and then finally settled into working for the United States Postal Service as a deliveryman for 33 years, retiring in 1981. He loved people and in return people loved him. Over the years, many of his close friends preceded him in death, Bud Smith, Rusty Wilde, Cecil Stroop, Calvin and Gary Hutto, and Scotty Woods to mention a few. However with his fun and loving nature he made and kept the Woods boys - Charlie, Bill, and Vance, George Pride and many others as close good friends with whom he spent many fun times and regaled with great stories and funny jokes. In 1963 at the death of their sister-in-law, Luella Word Roberts, Mary and Junior took in the adopted daughters of his brother Scott, Fonda Downs and Wanda Macklin, an adoption that proved to go beyond that of niece, aunt and uncle and became over the years that of daughters to their beloved "Nana" and "JR". An amazing man with a zest for life and never short of a laugh, he was always learning new things, finding new interests, such as bee keeping, beer brewing and horse racing. He loved to read and his amazing memory gave him a whole arsenal of knowledge that he shared with his friends including his ability to tell you exactly what roads led to where and how to get there. Visitations will be on Wednesday, 6-9:00P.M, November 2, 2016 at G. W. Cox Memorial Funeral Home. Funeral service will be on Thursday, 11:00A.M, November 3, 2016 at the First United Methodist Church with interment at Sunset Memorial Oaks Cemetery. Military honors will be presented by U.S Marine Corp and the Del Rio American Legion Post 595. Special thanks to all who have been such good friends and helped during this trying time and to family for being loving and caring throughout his life. "Love knoweth not its own depth until the hour of separation." Funeral arrangements with G. W. Cox Memorial Funeral Home, of Del Rio LTD, 114 Fletcher Drive, Del Rio, Texas. 78840 Ph: 830.775.2000

The family of James Volney Roberts, Jr. created this Life Tributes page to make it easy to share your memories.

Send flowers to the Roberts, family.