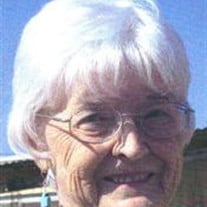 Janet LaRue Cobb Quigg “Jan” passed away January 24, 2013 at local hospital after 5 year battle with cancer in Del Rio, Texas. She was born June 19, 1930 in Texon, Texas. There was a hospital there because of the oil boom occurring at the time. Today, Texon is a ghost town. Janet was the daughter of W. H. Cobb, Jr., and Annie Farley Cobb. Their residence was in Waco, TX. But, Janet grew up in Sanderson, Texas, at the home of her grandparents, Beverly and Sarah Jane Farley, pioneer residents of Terrell County. She attended the Sanderson schools graduating in 1947 as the valedictorian of her class. With the help of a scholarship, she then attended Abilene Christian College. In the second semester there, she suffered a bout of red measles and had to drop out. She returned home to Del Rio, Texas to be with her mom and stepdad, C.A. Brotherton. She eventually began working at age 17 in a bank there, and liked earning her own money so she did not return to college the next semester. She married Poochie Quigg in February, 1950 in Del Rio, and moved to the ranch at Loma Alta, north of Del Rio, where her husband was ranching with his dad. They had two sons Ernest Quigg and John Kevin Quigg, both born in Del Rio, Texas. Jan worked as a bookkeeper/accountant, first at Laughlin AF Base, then at the Del Rio Hospital. When the latter closed, she was offered the job of comptroller of the Val Verde Memorial Hospital. In 1973, the Quiggs moved to west Texas to work for Terramar Corp. which built the large land development, Terlingua Ranch. After completion of this development Poochie became foreman of Chilicote Ranch, the West Texas division of the King Ranch, near Valentine, Texas in the Vieja Mountains. They remained there about eight years, then Poochie went to work for Big Bend Telephone Co, Alpine, Texas as a land man. While there Jan graduated from Sul Ross State University as a grandmother. She was a member of Alpha Chi, Sachems, and Kappa Delta Pi. She graduated in 1987 summa cum laude with a B.S. in Education, with a Music specialty. She taught piano in Alpine they both retired. Music is something that Jan is most remembered for—her musical ability. She began picking out her little nursery tunes at the age of 4, began music lessons at age 9, and never stopped learning. She continued to audit college classes after graduation. Jan played every kind of music playing for dances, programs and musicals, style shows, in music groups, as an accompanist. She especially enjoyed singing in choirs, singing in Sul Ross Concert Choir, with Big Bend Choir and Orchestra, and in many church choirs, where she often played and directed. She played for First Christian Church, First Baptist Church , St. James Episcopal Church in Alpine, St. James Episcopal Church in Del Rio, Texas, and St. Paul Episcopal Church in Marfa. They moved back to Terlingua fulltime in 1998 where she worked in the music program in Big Bend Church, Terlingua, playing and accompanying. She truly loved the Terlingua Church where she worked in many aspects of the church and in the Food Bank that the church had ongoing for years. She and Poochie lived at Terlingua until their deaths. While living in Alpine, Jan loved driving and delivering food for Meals on Wheels. She said she got more blessings from those shut-ins than she ever could have given. In Alpine, Jan was a past member of the Pilot Club, A.A.U.W., Woman’s Club, and Texas Mountain Trail Writers. She also became a member of the Texas Trail Walkers. Jan loved her piano students, music, books, hiking and nature, photography, but most of all, she loved the Lord. Preceding her in death were her mother, Annie Brotherton, her dad, W.H. Cobb, Jr., her stepdad, C.A. Brotherton, and her son, John Kevin and husband of 56 years Poochie Quigg. Surviving her are her son, Raymond Quigg and his wife, Ellen of Terlingua, Texas; grandsons: Raymond Quigg, Jr., and his wife, Ceneesa, and their son, Titan of Rankin, TX; Greg and Melissa Stein of Alabama and their son, Peyton; Cody Bill Quigg (US Army-Green Berets) and wife, Sally, and their two children, Bianca and Cody of Ft. Campbell, KY; Clint Kelley and his wife, Deanna of San Angelo and Tanner J. Quigg of Alpine. Pallbearers are John K. Finegan, Jimmy Hutto, Bill Ramsey, Roddy Schoenfeldt, Bubba Whitehead and George Johnson. Graveside services will be on Monday, 2:00P.M, January 28, 2013 on the Quigg family plot next to her husband of 56 years at the Masonic Cemetery. Funeral arrangements with G. W. Cox Memorial Funeral Home, of Del Rio LTD, 114 Fletcher Drive, Del Rio, Texas. 78840 Ph: 830.775.2000

Janet LaRue Cobb Quigg &#8220;Jan&#8221; passed away January 24, 2013 at local hospital after 5 year battle with cancer in Del Rio, Texas. She was born June 19, 1930 in Texon, Texas. There was a hospital there because of the oil boom occurring... View Obituary & Service Information

The family of Janet LaRue Quigg created this Life Tributes page to make it easy to share your memories.

Send flowers to the Quigg family.