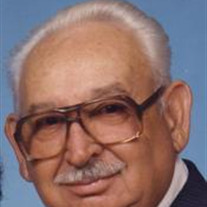 Jesus V. (Chuy) Munoz, Jr., 90, was born December 13, 1921 in Zaragoza Coah. Mexico, Chuy entered eternal rest at Uvalde Memorial Hospital on September 17, 2012 at Uvalde Memorial Hospital after a long illness. Left to cherish his memory is his wife of 65 years Santos F. Munoz, son Robert Munoz and wife Ruby of Brackettville, daughter Jeannie Munoz Torres of Las Vegas, NV; Grandsons Michael Munoz, Patrick Munoz of Del Rio, TX, Anthony Munoz of San Antonio, TX, Vincent Torres of Las Vegas, NV, Jaime Munoz of Ames Galicia, Spain, Joseph Munoz, John Paul Munoz and Angela Munoz of Del Rio, TX.; also numerous great grandchildren, nephews and nieces. Chuy was a dedicated and loving husband, father and grandfather. He was an ambitious and hard workingman. He served his country during WWII, was a member of St Mary Magdalene Catholic Church, he served the community in his early years as a member of the Chamber of Commerce, Rotary Club and School Board. Chuy was a successful businessman. He started small but worked hard to build and maintain his own grocery store "Chuy's Minimax" which still stands today and known as "Lowe's Supermarket" in Brackettville. He purchased and built many residential homes and commercial property in Brackettville, which kept him on the go at all times. He loved to hunt and fish and looked forward to hunting season. His most personal rewarding business was "Chuy's Deer Processing" which he owned and is now family operated. He was so proud to have his family share his passion in the business and found comfort in knowing that they would enjoy it as much as he did after he was gone. Preceded in death were his parents Jesus V. Munoz Sr. and Isabel Munoz, son Joseph A Munoz. Visitation will be held at St. Mary Magdalene Catholic Church on Wednesday, September 19, 2012 from 5 to 9:00P.M with Rosary at 7:00P.M. Funeral Mass on Thursday, September 20, 2012 at St. Mary Magdalene Catholic Church at 1200Noon with Father Moreno officiating followed with burial immediately at St. Mary Magdalene Catholic Cemetery. Pallbearers are Charlie De La Rosa, John Coronado, David Seargeant, Louis Fuentes, Lawrence Gray, Alfredo Pena. Honorary Pallbearers are Norman Mendeke and Bernardo Sotelo.

The family of Jesus V Munoz created this Life Tributes page to make it easy to share your memories.

Send flowers to the Munoz family.