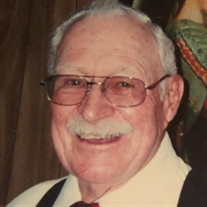 John Edward Graf passed from this life on October 21, 2019, at the age of 92. He was born in Del Rio, Texas on May 7, 1927, the son of John A. and Rosa E. Graf. He graduated from Del Rio High School in 1944 and attended St. Edwards University for one year before joining the Navy near the end of World War II. After his service, he returned to Del Rio and married a former high school classmate, Nancy Ann Wilson, a union that lasted 70 years. Together they raised six children; Laura Womack (John, deceased), David (Candy) Graf, Martha (Michael) Eissler, Robin (Steve, deceased) Donnelly, Mary (Irving (Bubba)) Tyler, Johnna (David) Antu. In addition, they were blessed to see 13 grandchildren and 11 great grandchildren brighten their lives. He began work as an electrician, initially with Taylor Duke Electric and later A&G Electric. Subsequently he became the electrical trades teacher in the Del Rio High School vocational department. His teaching skills were rewarded as several of his students won awards at state UIL competitions over the years. Upon retiring from the school district, he embarked on another career which was dear to his heart. He began studying for the Deaconate program of the Catholic Church, and he was ordained a deacon in 1988. He served in this capacity at both Sacred Heart Catholic Church and Our Lady of Guadalupe Catholic Church for over twenty years. As part of this vocation, he also served as a lay chaplain at Val Verde Memorial Hospital and on the pastoral council for Del Rio. In his spare time, he and his wife Nancy participated as hospice volunteers. Everyone who knew John was aware of his penchant for playfulness. Many a friend or colleague experienced an unexpected bear hug or found themselves the victim of a harmless practical joke. You had to be on your toes when John was around. But he also had his serious side, as evidenced by the fact that he received the first ever Catholic Layman of the Year award from the San Antonio Archdiocese in 1963 for his work at Sacred Heart Parish. John was an avid gardener, spending many delightful hours raising tomatoes, the surplus of which went to his many friends. However, he was never successful getting his grandchildren, or anyone else for that matter, to “help him pull weeds”. A special thanks is extended to Dr. Terry Lindsey (also for the hint about earth boxes), the nurses at Val Verde Regional Medical Center Hospice, and the caring staff of Southwest Assisted Living. In lieu of flowers, the family suggests donations to the Friends of Hospice or the charity of your choice. Pallbearers will be Ben Graf, Will Graf, Luke Graf, Christopher Antu, Michael Antu and Joseph Eissler. Honorary pallbearers are Robert Kusenberger, Jr., Anthony Kusenberger and Jacob Kusenberger. Visitation will be held on Thursday, October 24, 2019 from 5:00 p.m. - 8:00 p.m. with a Holy Rosary starting at 7:00 p.m. at G. W. Cox Memorial Funeral Home chapel. A Mass of Christian will be held on Friday, October 25, 2019 at 10:00 a.m. at Sacred Heart Catholic Church burial will follow at Sacred Heart Catholic Cemetery. Funeral arrangements are under care and direction of G.W. Cox Memorial Funeral Home, 114 Fletcher Drive, Del Rio, Texas. For more information you may contact us at (830)775-2000 or www.gwcoxmemorialfuneralhome.com.

The family of John Edward Graf created this Life Tributes page to make it easy to share your memories.

Send flowers to the Graf family.