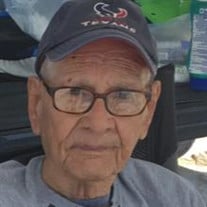 Juan “John” Jauriqui, age 93, entered into rest on June 23, 2020 in Castroville, Texas. John was preceded in death by his parents, Juan and Candelaria Jauriqui, son, Victor Jauriqui, sisters Josie Rocha, Juanita Ridel, Neela Rodriguez, and brother, Paul Jauriqui. He is survived by his wife of 37 years, Dolores C. Jauriqui. Daughters, Edwina Avelar, Jessica G. Evans (Jeffrey Evans) and son, Bobby Jauriqui. Grandchildren, George Avelar, Michael Avelar, Orlando Avelar, Lynae Jauriqui, Anthony John Jauriqui, Gabriela Yeackle, Brayden and Colton Evans. Nine great grandchildren, one great-great grandchild, numerous nieces, nephews, Mr. Vicente Guererro and Family. John was a part of the “Greatest Generation”. He proudly served in the US Navy during WWII from 1943-1946. After his time in the military, he was a State Trooper in New Mexico for several years. He later went on to work for Coca-Cola for 22 years and then General Beverages (Pepsi) for 20 years. During his retirement, you could find him in his 1976 Ford F-150 on Hwy 90 headed to his ranchito where he spent time with his goats, enjoying the outdoors, and building things. In his later years he built bookshelves to donate to local nursing homes along with books and magazines as well as wooden toys that he would donate to local fire departments for distribution. He also got involved with the VFW. John was full of stories and jokes. He will be greatly missed by his family and many friends in the community. Visitation will be held Tuesday, July 14, 2020 at G.W. Cox Memorial Funeral Home for 6:00pm – 9:00pm with a Holy Rosary at 7pm. Catholic Mass will be held on July 15, 2020 at Sacred Heart Catholic Church at 10:00am. Funeral arrangements are under care and direction of G.W. Cox Memorial Funeral Home, 114 Fletcher Drive, Del Rio, Texas. For more information you may contact us at (830)775-2000 or www.gwcoxmemorialfuneralhome.com

The family of John Victor Jauriqui created this Life Tributes page to make it easy to share your memories.

Send flowers to the Jauriqui family.