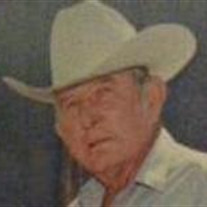 John Henry "Pete" Rosenow died at his home at Mud Creek Ranch, Kinney County, Texas on November 3, 2013. Pete was born on the Rosenow family ranch near Carta Valley on November 26, 1923 to Henry and Ruby Rosenow. He is survived by his son: Paul... View Obituary & Service Information

The family of John Henry Rosenow created this Life Tributes page to make it easy to share your memories.

Send flowers to the Rosenow family.