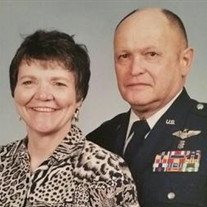 Lt Col (USAF Ret) John Erwin Wurmstein passed away at Val Verde Memorial Hospital, Del Rio, Texas, on Wednesday, July 26, 2017. In the presence of family, he was called home by God to join his wife of 51 years, Gail D. Wurmstein. Lt Col Wurmstein was born on December 29, 1935, in Burnstown, Minnesota, to Erwin and Angela Wurmstein. In 1960, he joined the Air Force as a navigator, and a few years later met and married the love of his life, Gail. He completed three tours of duty in Viet Nam as a highly decorated navigator of his beloved “Gooney Bird,” the AC-47 aircraft. In 1981, he was stationed at Laughlin Air Force Base in Del Rio, Texas, where he was a popular and highly awarded instructor of aerospace physiology until he retired from the Air Force in 1987. Shortly thereafter, he became the Air Force Junior ROTC commander at Del Rio High School, where he taught until 2005. His JROTC students soon learned to love the Gooney Bird as much as he did, and will remember fondly the tradition of bowing at the very mention of the airplane. He cared deeply for every one of his “kids,” which included both family and students, and they all loved him dearly. John was also a loving father, an active member of Sacred Heart Catholic Church, and a leader in the Boy Scouts of America. He is survived by his children Anthony Wurmstein and his wife Gail C., David Wurmstein and his wife Rebecca, Joseph Wurmstein and his wife Andrea, and Deanna Schaefer and her husband John; his grandchildren Eric, Michael, Gene, Wendy, Patricia, Kimberly, Alexandra, and Joanna; and his brother-in-law and dear friend Thomas Brooks. Visitation will be held on Sunday, July 30, 2017 from 6 to 9 PM at G. W. Cox Memorial Funeral Home. The Rosary will start at 7:00P.M. Funeral Services will be held on Monday, July 31, 2017 at 10 AM at Sacred Heart Catholic Church, with interment to follow at Sunset Memorial Oaks Cemetery. Funeral arrangements with G. W. Cox Memorial Funeral Home, of Del Rio LTD, 114 Fletcher Drive, Del Rio, Texas. 78840 Ph: 830.775.2000

The family of John E. Wurmstein created this Life Tributes page to make it easy to share your memories.

Send flowers to the Wurmstein family.